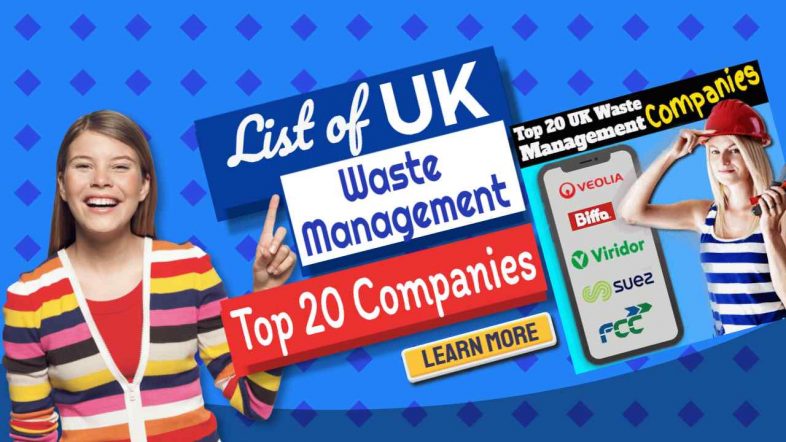 The UK Waste Management Top 20 Companies are listed below with the latest published data ( 2019/2020) Revenues are given in £ millions GBP. 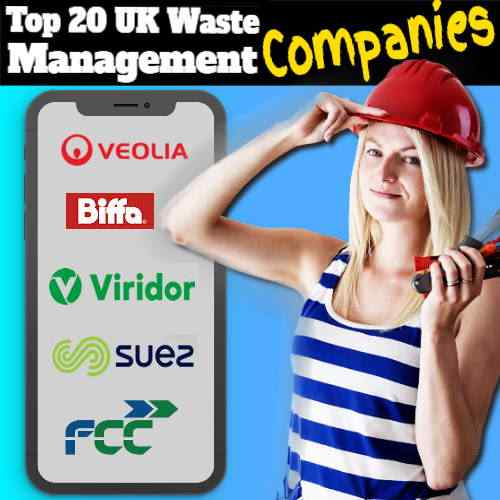 A summary of the background information for the top 5 UK Waste Management Companies is provided below the following chart of the top 20 companies.

Veolia Environmental Services comes first. It is clearly very successful. It is the largest UK Waste Management Top 20 company in terms of revenue by a considerable margin.

The UK Waste Management Top 20 companies (in 2019/2020) are listed below, with the revenue of each in millions GBP: 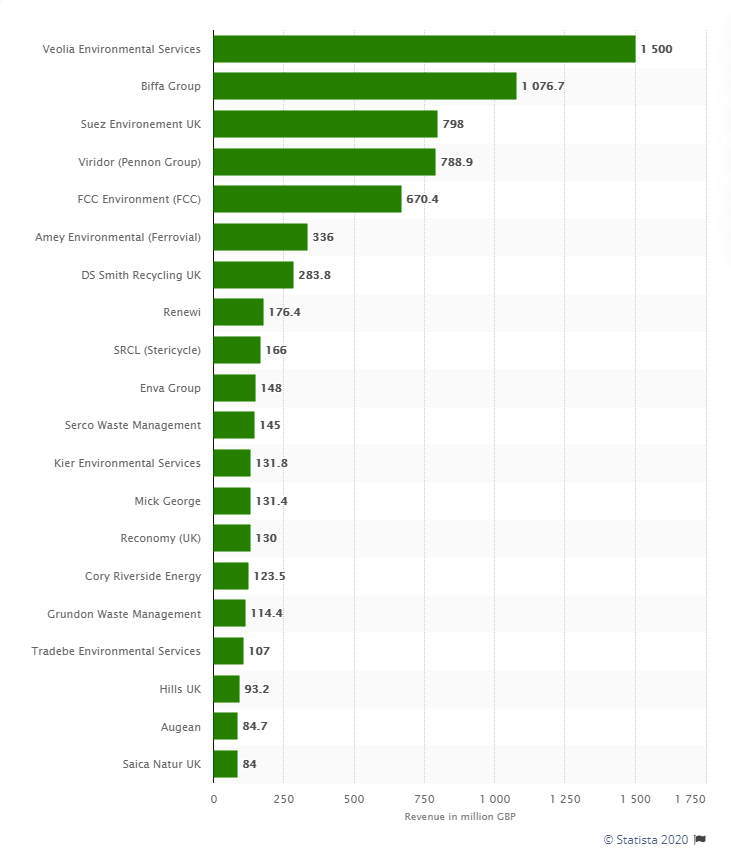 “The so called ‘Big Five' of the waste management services industry (Veolia, Biffa, Suez, Viridor and FCC) maintained their dominance, with FCC once again doubling the revenue of Amey Environmental. In total, the Big Five generated revenues of 4.8 billion British pounds, while the combined revenues of the remaining 15 companies amounts to less than half that amount.”

“Of these, the French transnational Veolia Environment Services recorded the largest revenue of the leading waste management services working in the United Kingdom at 1.5 billion British pounds. In the same year, Veolia generated a global revenue of 24.8 billion euros.”

We have taken the top 5 of the “UK Waste Management Top 20 Companies”, and extracted their essential details, and for most, we have also included a short summary history of their origins.

Veolia, the UK's environmental solutions leader, offers a complete variety of waste, water, and energy management services designed to support the circular economy and protect precious raw materials. It employs about 78,000 people, operates in 35 countries, and produced nearly €9.02 billion in sales even back in 2009. It specialises in waste management, treatment, and disposal, as well as waste recycling, reclamation, and re-use. Veolia Environmental Services handles both solid and liquid waste, as well as hazardous and non-hazardous waste.

Biffa is the second-largest integrated waste management firm in the UK for turnover, ranking second among the Top 20 UK Waste Management Companies.

Biffa plc is a waste management firm based in High Wycombe, England. It offers collection, dumping, recycling, and special waste services to local authorities as well as industrial and commercial clients in the United Kingdom.

Within its municipal sector, Biffa serves approximately 2.5 million households and collects 4.1 million garbage every week, and it has over 72,000 industrial and commercial clients. In terms of revenue, it is the second-largest waste management firm in the United Kingdom. Biffa is the UK's largest waste management firm in terms of the volume collected and provides national coverage, collecting over 250,000 bins every week and covering 95% of UK postcodes.

SUEZ, a global specialist in the water and waste sectors, assists cities and enterprises in the circular economy in preserving, optimising, and securing the resources critical to our future.

It sits in 3rd place on our leader board within the UK Waste Management Top 20 Companies list.

Waste and recycling services provider SITA UK was rebranded as SUEZ Environnement in March 2015), adopting ‘a new position’ in the management of resources. SITA UK, the UK division of the global SUEZ Environnement Group, joined the other subsidiaries within the group to operate under a single name. The firm has, since 2015 become the Recycling and Waste Recovery UK division of SUEZ Environnement, with changes to branding on vehicles and the company website at that time.
Until 2015, the group’s activities were organised around two ‘key’ areas – water and waste. In 2015 SUEZ Environnement was reorganised to take a more resource-focused approach across these two sectors.
This simplified its multi-brand structure. With SUEZ Environnement currently operating in more than 70 countries around the world across in excess of 40 different brands, this company is a true leader in global waste management. via SITA UK rebrands as Suez Environnement

Pennon Group Plc is an environmental utility infrastructure company at the top end of the FTSE 250 which owns South West Water Limited and Viridor Limited.  (Viridor comes from the Latin ‘to become green‘.) It is a recycling, renewable energy, and waste management company based in the United Kingdom. The Pennon Group is an FTSE 250 PLC focused on the water and waste management industries.

The waste company Viridor was formed originally in 1956 as Harrison Western Ltd, and later became Haul Waste Ltd. Haul Waste became part of Pennon (then South West Water Ltd) in 1993 and grew by purchasing companies in the waste collection and landfill disposal market.

It subsequently acquired part of Churngold's waste business in June 2003, Thames Waste Management in 2004, Somerset LAWDC Wyvern Waste in 2006, Grosvenor Waste Management plus Skipaway Holdings in 2007, and Shore Recycling in 2008.

Today the business is valued at over £1.5 billion, with recent acquisitions and growth focused on expanding the company's recycling and energy from waste capacity. Viridor was awarded the Greater Manchester Waste PFI contract, the largest waste and renewable energy contract in the UK. via Viridor – Wikipedia

With activity throughout Europe, Africa, North and South America, FCC is one of the world's largest environmental services companies. More than 36,000 FCC employees worldwide interact with citizens on a daily basis and focus on constantly increasing sustainability. via FCC Environment.

FCC Environment (UK) Limited is a waste management company headquartered in Northampton, United Kingdom and a wholly-owned subsidiary of Fomento de Construcciones y Contratas. It was formed in May 2012 through the merger and rebranding of Focsa Services and Waste Recycling Group.

This page has been repeatedly updated from the original 2006 post and most recently the table was updated in June 2021. The original post is provided below, as a historical record. 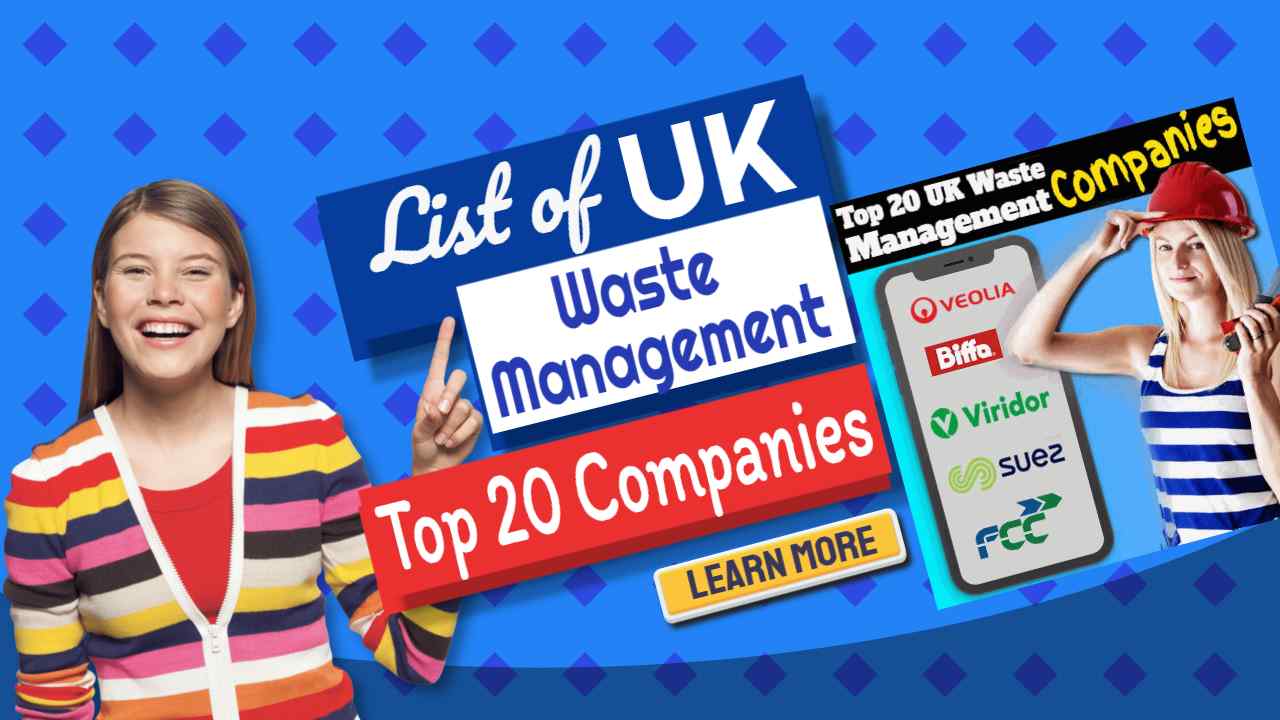 In 2006 the UK waste market continued to consolidate, mainly through acquisitions. These have again increased the market share of the industry's leading players. We have used the latest reported turnover of the 20 largest UK waste management companies as our “UK Waste Management Top 20 Companies”, and made our best guess at ranking them as best we can.

However, although Cleanaway is now part of Veolia, they became the biggest after the Veolia take-over in the autumn – we will await the company accounts to verify that. It is no surprise that the gap between the leading half dozen companies and the remainder of the industry has widened further.

Since the Veolia-Cleanaway merger, there are just 6 companies at the highest turnover level. However, what a huge turnover it is for these companies at half a billion UK Pounds and more per annum.

Do give the Waster feedback about these UK Waste Management Top 20 Companies if you think we have it wrong! Just click on the “Comments” link below and tell us what you think.

All our UK Waste Management Top 20 Companies are ranked based upon Official Company Tax Records as filed at Companies House UK, Stock Exchange Records or other sources. Statista data is shown on the chart, refer to Statista for sources and verification. 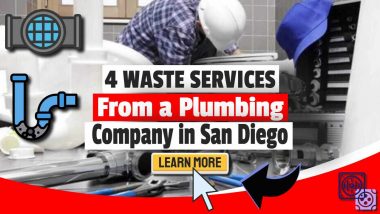 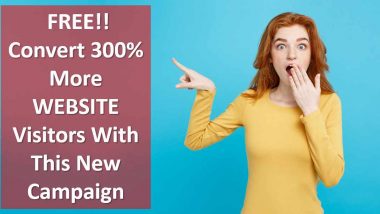