By waster on 9 April 2018 in landfill directive

Landfill Directive compliance has been an issue across the EU for almost 15 years. We first posted about this in December 2006, when ISWA posted an article, reproduced below. EC legal action against non-compliant member states, over the Landfill Directives, isn't just a pedantic wish from compliant states. It brings many real health, and cross-boarder pollution concerns with it. It is essential that when EU Regulations are agreed, ALL member nations must comply in accordance with the agreed dates.

This page has been updated since our first post in December 2006. The latest update was in April 2018. 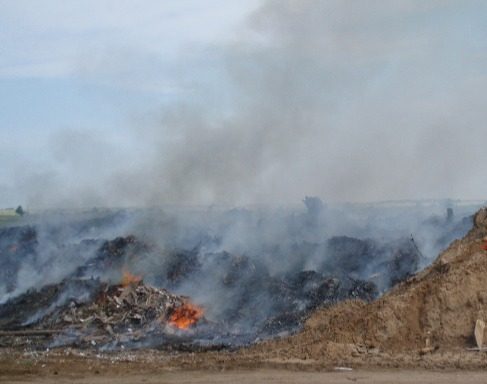 15 December 2006 (Waste Management World – ISWA): The European Commission decided to start legal action against seven Member States for inadequately transposing the EU's legislation on the landfill of waste into their national law.

Compliance with the Landfill Directive is a serious problem throughout the EU. The Commission therefore launched a screening exercise to compare Member States' national legislation with the Directive to detect where the shortcomings are. The aim is to ensure that landfills operate in full accordance with the Directive (i.e. in a way which do not harm human health or the environment).

‘The Landfill Directive is an essential measure for protecting people's health and the environment against the dangers that waste can pose. However, it is clear that the directive cannot have its full effect unless Member States turn all of its requirements into their national legislation. I urge them to do so without delay.'

It can be seen now, that the above article was just the start of further actions which led to the imposition of fines. The next article shows, that in the months, and years, that followed individual states were enjoined in legal action:

March 2007: The European Commission has decided to start legal action against 14 member states to enforce Landfill Directive Compliance, including Malta, for inadequately transposing into national law the EU’s legislation on the landfilling of waste.

The Commission said its action followed a comprehensive evaluation of the degree of compliance with the Landfill Directive by 25 EU member states. The directive governs operation of landfill sites and is a key measure to protect human health and the environment against potential hazards from waste.

“The Commission’s checks have revealed many shortcomings in compliance with the rules on waste landfills in virtually every member state. The result is that human health and the environment are not being protected as well as they need to be against dangers from the dumping of waste. Eight years after the Landfill Directive was adopted, it is high time for all member states to rectify this situation without further delay.”

The Commission has carried out a check on the legislation of 25 EU member states to assess conformity with the Landfill Directive.

In each of the 14 member states which are to receive first warnings, various provisions have not been fully transposed into national or regional law.

It is assumed that most member states got their acts together on Landfill Directive Compliance. In later articles, and EU reports there are no further references to 14 nations being pursued for non-compliance. We found that nevertheless a lesser number of EU states have remained non-compliant, and fines have been imposed on a number of them.

Before we go further and for clarification, let us explain the basics to any readers not fully conversant with the regulations we refer to as requiring Landfill Directive Compliance:

What is the Landfill Directive?

The Landfill Directive, adopted in 1999, establishes a set of detailed rules with which waste landfills must comply. The objective is to prevent or minimise the negative effects that landfill sites can have, such as pollution of water, soil and air, and emissions of methane, a powerful greenhouse gas. The directive also helps to promote the recovery and recycling of waste. In particular, it bans certain types of waste from being put in landfill sites, for example used tyres, and requires member states to reduce the amount of biodegradable waste they landfill to 35 per cent of 1995 levels by 2016.

Under What Authority Does the EC Invoke the Legal Process?

Article 226 of the Treaty gives the Commission powers to take legal action against a member state that is not respecting its obligations.

Clearly, EU Landfill Directive compliance problems had still not been resolved by 2013, as shown by the following extract about the poor implementation of the Directive by Greece:

Greece Fails to Comply with the Landfill Directive 2013-14

As a full member of the European Union since 1981, Greece has an obligation to comply with applicable EU legislation on waste management such as the Landfill Directive 1999/31/EC and ensure their [Landfill Directive Compliance].

The country currently produces about 4.5 million tonnes of domestic and commercial waste, equivalent to a per-capita waste generation rate of 450 kilograms annually.

Paradoxically, despite the current economic situation in Greece, waste generation has continued to increase year on year; this situation has been partly attributed to the influence of migration from EU ascension countries.

Of the total amount of municipal solid waste (MSW) generated in Greece in 2010, 80% was landfilled.

From the foregoing, it can be seen that Greece is at the moment, far from complying with the expectations of the EU Landfill Directive for developed member states (1999/31/EC).

As much as 81% of the MSW landfilled in Greece is biodegradable municipal waste.

In specific terms, this waste stream comprises mainly of, food waste 39.7%, paper 22% and other organics 10.5%. Notably, the EU Landfill Directive (1999/31/EC) sets out stringent targets for the reduction of biodegradable municipal waste sent to landfill in all EU member states.

These targets are set as follows:

Greece was non-compliant, despite having been given a four year derogation by the European Commission to implement alternate waste treatment infrastructure. Since then, the country has struggled to achieve the minimum target of the Landfill Directive.

… via A Critical Review of Municipal Solid Waste Legislation and …

Greece is not alone, again in 2013 Portugal failed to comply, and the following extract shows their failure:

Statistics show that landfill rates in Portugal remain very high (50%) and recycling rates are still too low (26%) to comply with the waste hierarchy and with the 50% recycling target set in the EU Waste Framework Directive (WFD) which has to be met by 2020.

The Landfill Directive sets out specific [Landfill Directive Compliance] targets regarding bio-waste and how it should be disposed of in landfills. Specifically, by 2006, biodegradable municipal waste going to landfill must have been reduced to 75 % of the total amount of biodegradable municipal waste (BMW) generated in 1995. This share is required to be further reduced to 50% and 35% by 2009 and 2016, respectively.

[Landfill Directive Compliance is required] according to Commission Decision 2011/753/EU of 18 November 2011 establishing rules and calculation methods for verifying compliance with the targets set in Article 11(2) of Directive 2008/98/EC.

Portugal took up the option of derogation for the targets referring to the years 2009 and 2016, effectively deferring these to 2013 and 2020. According to an APA report evaluating the progress towards EU targets, the goal was almost achieved for 2013, as 53% of the Biodegradable Municipal Waste (BMW) was sent to landfills.

A report from the Portuguese Environment Protection Agency (APA) suggests that achieving Landfill Directive Compliance, to the 2020 target will depend greatly on whether new infrastructure is built in the manner anticipated.

The underlying causes for the current distance to EU waste targets are:

On 2nd of December 2014, the Court of Justice of the European Union issued landmark judgments relating to two Member States’ non-compliance with EU waste law. Multi-million euro fines were levied on Greece (Case C-378/13) and Italy (Case C-196/13) for continued non-compliance with the Directives on Waste, Hazardous Waste and Landfill.

In its judgment against Greece, a one-off fine of €10 million was imposed, with the Court also ordering that a further €14.52 million should be paid for every six months non-compliance continues.

The separate judgement against Italy mandated a lump sum fine of €40 million, in addition to recurring six-monthly penalty payments of €42.8 million that continue until compliance has been achieved. The six-monthly penalties affecting both countries reduce progressively as each non-compliant waste site is closed or otherwise rectified.

These judgements are the culmination of a long-term investigation by the European Commission, with the fines reflecting the Court of Justice’s view that little progress had been made by either country in complying with earlier judgements relating to their unauthorised waste sites. …

Finally, and notwithstanding the content of the progress report published by the Department of the Environment, it should be pointed out that the fines set down by the Court of Justice on Italy and Greece show what might happen if there is any evidence of any further systemic failure of waste regulation in Ireland.

They dwarf the penalty Ireland was subject to for its persistent flouting of EU law relating to discharges from septic tanks (Cases C-188/08 and C-347/11), where Ireland was fined €2 million, with a €12,000 per day penalty for continued non-compliance.

In this respect, the Greece and Italy judgements should serve as a salutary reminder to national government of the need to resource adequately both local authority and EPA waste enforcement.

IMPEL is the EU Organisation which has been set-up by the EC to monitor the implementation and enforcement of environmental law across all member states.

In the above report they state in the executive summary that:

During the duration of the project (2011-2016), participants have been working on a project Reinforcement program for inspections skills according to the landfill directive. The Council Directive 1999/31/EC on the landfill of waste and the Council Decision of May 2002 establishing criteria and procedures for the acceptance of waste at landfills (2003/33/EC) set standards for the authorisation, design, operation, closure and aftercare of landfills. Improving implementation of EU law is a high priority objective of both the European Commission and IMPEL. Recent reports on implementation of EU waste legislation have shown that “implementation and enforcement of EU waste law remain poor particularly regarding the waste framework directive, the landfill directive and the waste shipment regulation”.

We also extracted the following text which shows that there is a continuing concern about a lack of Landfill Directive Compliance:

The majority of the Member States have implemented the topic via national law however there are a number of significant differences related to the bottom and the surface layer conditions.

The differences [in Landfill Directive Compliance] are seen where the above mentioned provisions are specified in the IPPC permit or special national regulation, within the building permit, or there are no special regulations imposed at all. Each Member State has prescribed the minimum criteria for the bottom and top layer within certain types of national regulations.

From the questionnaire it was concluded that there are a large number of differences [in Landfill Directive Compliance] and the control of these topics between Member States.

This seems to be a misdirected effort, as there are clearly still problems with implementation of the original targets within the Landfill Directive. Non conforming [Landfill Directive Compliance] states must comply, or the whole fabric of the EU will fall apart, due to the unfairness of the entire legal structure, when some states ignore the consensus of the majority.

What is Vermicomposting and Why is it Becoming Increasingly Popular?
More Effort Needed to ‘Reduce, Reuse and Recycle’ says UK Environment Agency