How does the motor industry meet its ambitious scrap car recycling targets? 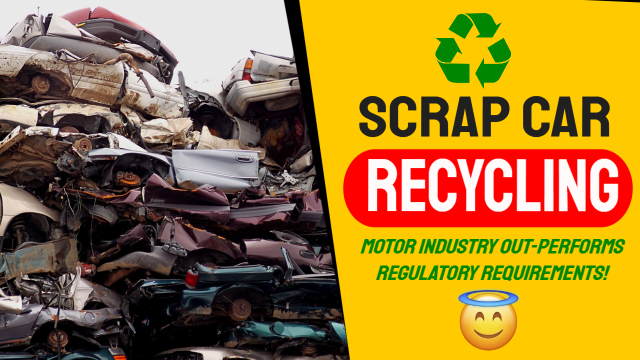 Back in 2015, the European Union set an incredibly difficult target for vehicle recycling (also known as scrap car recycling) in the motor industry.

It was decided that with some changes to manufacturing processes and how “end of life vehicles” (ELVs) were handled, 95% of the materials used to make a vehicle should be recovered and reused when recycling scrap cars.

With lots of steel and aluminium in scrap cars, recycling rates we already fairly high – with around 85% of materials recovered – but the latest EU figures show that the UK has managed to bump that number up to 96.9%; a figure that beats Germany, France, Norway, and Sweden.

Although 2015 marked the point at which the UK was expected to reuse/recover 95% of ELV material – the EU’s ELV Directive was actually brought in during Sept 2000, and it represented a staggered approach to reaching this high rate of material recovery.

By 2006, EU states were expected to have reached an 85% recovery rate – and the 15-year overall window was designed to allow new manufacturing processes and materials to complete their life-cycling as a vehicle – before being handled by Europe’s scrap yards.

In response to the new EU directive, the UK government introduced The End-of-Life Vehicles Regulations in 2003. This wide-spanning piece of legislation introduced the requirement for scrap yards to become registered ‘Authorised Treatment Facilities’ (ATFs).

As well as following a strict set of environmental rules, ATFs would become the only scrap car recycling facilities that could officially destroy an ELV.

To make the destruction process official, the ‘Certificate of Destruction’ (COD) was also introduced – a now essential piece of paperwork issued by the DVLA and sent to the ATF, confirming that the car has been destroyed and is no longer the responsibility of the previous keeper.

This scaffolding that now surrounded the ELV process now meant that cars would not slip through any cracks; every scrap vehicle would be subject to the same official process – handled in a prescribed way by authorised dismantlers.

Although TV programmes and kid’s cartoons might lead you to believe otherwise, scrap cars do not simply get crushed into a cube and stacked up! In fact, the process is incredibly involved.

This video shows a detailed breakdown of the process – but we’ve summarised it and expanded on some of the steps you’ll see in the video below:

When your car arrives at the ATF, any hazardous fluids or substances are removed from the vehicle. Generally, this will include:

It’s vital that these are removed carefully and handled appropriately. With millions of ELVs processed every year in the UK, there’s the potential for millions of gallons of dangerous fluids to escape and damage the environment if handled recklessly.

Sometimes, these substances will be removed from the site and handled by a specialist company – but it’s not uncommon for ATFs to begin processing these substances on-site. For instance, many ATFs will use specialist storage solutions that allow for ‘reverse osmosis’ – a process that involves passing hazardous fluids over a series of membranes that capture the chemical components and leave clean water.

With fluid removed from the car and handled – the systems that have held these fluids are flushed through, making sure there’s no trace of any impurity before the car moves to the next part of the process.

With the car clear of hazardous substances, the dismantling process can begin. Generally, this will involve removing – at the very least – the catalytic converter, the tyres, and the glass from the car.

Tyres can be especially harmful to the environment if they’re not recycled appropriately – so they will be sent to a specialist company who will handle them. Reuse is the name-of-the-game with tyres – and many become soft-floor coverings for sports areas and playgrounds.

The catalytic converter will receive special attention too – not least because the filter inside it contains a host of precious metals that help with the exhaust filtering process. These precious metals can be reused in a host of applications – from medical devices to jewellery.

With these parts removed, the facility will decide whether the car is crushed and shredded – or whether further parts are removed intact and recovered for resale.

Until the destruction stage, the vehicle still looks somewhat like a car – but specialist hydraulic presses and industrial shredders will soon change that.

With some or all parts removed from the vehicle, it will then be compressed and fed into a high-powered shredding machine – where even tough steel components will be turned into small chunks, roughly the size of your hand. Since many vehicle parts are coated in tin to prevent rusting, these parts will be ‘detinned’ in a chemical bath to remove this coating – making the materials more easily reused.

The shredded parts from the car are separated again – with most materials generally sold back into manufacturing industries, creating a more circular economy around the motor industry.

Of course, not everything is neatly packaged up and used again – but as technology develops, even the left-over plastics, rubbers, fibres and glass can be reused. These ‘left-over’ materials are referred to as Automotive Shredder Residue (ASR) – and there are specialist companies who can process this material and use it create synthetic crude oil – slightly easing the strain on the planet’s natural reserves.

They might not look it at a glance, but the dismantlers and yards that recycle scrap cars are actually helping to push the industry forward like never before – and as new manufacturing processes creep through into ELVs, the process will become more and more efficient.

We’re not quite at the stage where 100% of any truly practical car can be reused or recycled – but as more and more manufacturers acknowledge their environmental responsibilities, we’re edging closer to fully sustainable transport all the time. 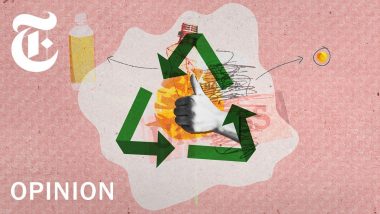 How Much Plastic is Recycled – US and UK Recycling Video Explains