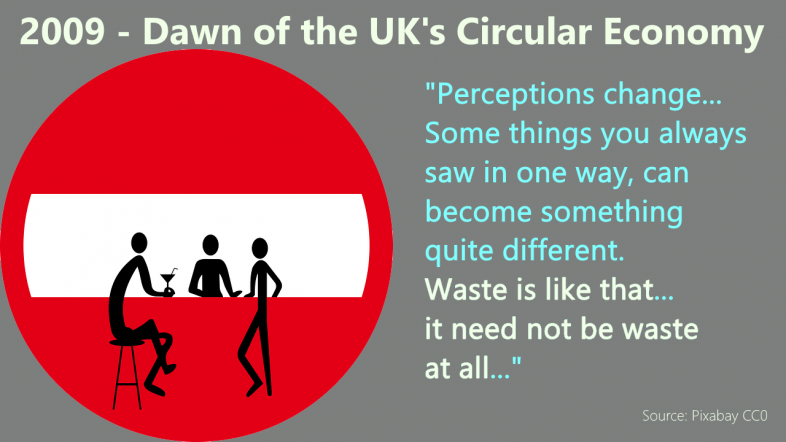 2009 was the dawn of the Circular Economy, because it was the first year that UK landfill disposal was made (by a landfill taxation rise) more expensive than recycling. It was the year waste became a resource.

In this article, we look back at United Kingdom Waste Management in 2009, and to the future for the circular economy:

2009 The Year Waste Became a “Resource Optimisation Opportunity” and the Move to a “Circular Economy” Began.

Until the watershed year of 2009, the United Kingdom (UK) had traditionally used landfill disposal as the main method of waste management, but in that year the landfill tax rose crucially. What had been an escalating charge per tonne for some years, finally and unequivocally rose above the cost of recycling for municipal, industrial and commercial wastes.

We think that in future years 2009 will be seen as the dawn of the circular economy in the UK.

It had long before that been recognised that landfilling is unsustainable due to its long-term harmful effects on the environment and public health. The EU Landfill Directives had been enacted with landfill diversion targets. These are targets set with the intention of reducing landfilling.

But, targets are just that. They don't make any difference, unless backed up by effective policies. And, in the UK the most important policy was raising landfill tax, coupled with a large investment in municipal waste processing facilities which began to take-effect in 2009.

Under the European Union (EU) Landfill Directive, and starting in 2006, member nations were required to divert biodegradable municipal waste (BMW) from landfills. The UK has also committed to the EU Renewable Energy Directive, which binds it to sourcing at least 15% of its energy mix from renewables by 2020.

Through the first decade of the new century, the emphasis was on recycling. However, until recycling became cheaper than landfill, many thought of recycling as a bit odd. It was “out of the mainstream”. (Something for those slightly eccentric people, who like to wear leather sandals all year round!)

Well, 2009 was the year that all changed. It was the year when accountants looked at company balance sheets and started asking why companies were not recycling.

The Waste Hierarchy and the Circular Economy in 2018

The waste hierarchy (which entails a good deal more than recycling) was in place as a philosophy in 2009, and this is still the case, but it can be argued that recycling will only achieve waste diversion up to a point. Sustainability can only be achieved at the levels needed from now on, by implementing the 3R‘s of the waste hierarchy (reduce (minimise waste), re-use, recycle).

Not only that, the waste management industry has also realised that another “R” has to be fitted into the list. It's place is between recycling and landfill, and its name is recovery. For most materials this means “energy recovery”.

It has also been appreciated throughout Europe and in many other nations that the “circular economy” (powered by renewable energy) has to be implemented through strong policy making to secure today's wealth and quality of life for future generations.

At the time of writing the UK has agreed to all the EU proposals and targets of the revised Circular Economy Package (post Brexit), which is about to become EU Law within all member states. So, it would seem to us that 2009 should be seen as the dawn of the circular economy in the UK.

How Waste Management Looked in 2009

We wrote the following:

“Throughout 2009 a number of aspects of UK waste management policy that have been in place for some time came together so that for the first time a genuine shift in the industry could be detected.”

We now know that “shift” was the dawn of the circular economy in the UK.

Where profit is there to be made by the trailblazers, others will now follow to secure waste contracts for the “resource” that collected material provides them.

If asked what the single biggest influence on this was, during 2009, I would say it as the government's Landfill Tax escalator policy which meant that for most waste disposers, for the first time this year, landfill disposal actually became more expensive than recycling.

You can argue around the detail here, but I had not before the summer of 2009 witnessed recycling companies able to say they could offer price competitive disposal prices when head-to-head bidding against the traditional landfill operators.

Another major driving force in UK waste management which is powering the evolution from a “disposal problem” to a “resource optimisation opportunity” are the high targets for waste diversion from landfill. And, 20 year or longer integrated waste management contracts. These are public/private partnership projects which the UK government was, in 2009, pushing ahead with in order to achieve those targets.”

(The UK was Labour led until 2010, since then the Conservative Party has been effectively in power.)

Here to, we saw a major milestone achieved while the recession was biting the hardest early in 2009. This was the successful planning application, and award of contract, for the £4 billion Greater Manchester Waste PFI Contract, the largest of its kind in Europe. And, all this was to be built upon stakeholder involvement.

However, the Greater Manchester PFI Contract was only the most high-profile example of a procurement revolution which probably reached its peak of activity during 2009, and saw similar contracts either largely in place, or planned, throughout the nation.

The year also saw a number of these projects hit the headlines not in a good way, and some Energy from Waste schemes being pushed back at planning (Cornwall and Edinburgh for example).

However, the trend continued and accelerated so that for all waste streams and/or locations where re-use or recycling of waste is not viable, energy recovery is being reinforced as the preferred option. Landfill disposal must only now be used only as a last-resort.

Once again, this reinforces our view that 2009 will be seen as the dawn of the circular economy in the UK.

In 2009, and for a long while before that, the major Energy from Waste (EfW) producer had been landfills. Specifically, the only biogas production of note had been from landfill gas (LFG) utilisation. However, the relative importance to LFG utilisation as a proportion of total energy from waste production was now to decline. In 2018, the new big producers of EfW are incineration and anaerobic digestion.

Each month in the years that followed 2009, would see the roll-out of new Energy from Waste (EfW) projects coming on-stream. However, while the adoption of new waste technologies was being supported in the UK by government departments, the perceived high risk for the PFI partnerships reflected in high contract charges, has subsequently been seen as unacceptable.

2009 was a bad year for implementing the more innovative of these in other industries. Many more problems with the early PFI contracts have since come to light, and now they have a bad reputation with the public.

The increased cautiousness of the banks funding the private element of these projects in 2009 due to the banking collapse came at a very unfortunate time. It did, in my view, severely detract against the bank-ability of some of the most innovative schemes. Schemes which, if they had continued using new technologies, could have led to new waste processing methods which due to the banking crisis never got off the ground.

In fact, 2009 saw the shelving of quite a number of the more adventurous new waste technology options in favour of more traditional incineration technology.

2009 the Year Security of Imported Energy Supplies Became an Issue

During the year events also reinforced the wisdom of encouraging the use of EfW and other home grown renewable energy sources, within the global scene. It was finally appreciated by policy makers that basing national energy policies on sole reliance on a limited number of fossil-fuel based suppliers (Russia, Middle-East etc.) was a risky strategy.

Many people will remember that early in 2009 the EU experienced the deep rationing of natural gas supplies to some European nations which were themselves unconnected with a certain producer country dispute. This held up supplies during the coldest weather and in a completely arbitrary fashion.

Most now strongly support the benefits of renewable energy for:

However, good though that may be for waste as an opportunity, the main event of the year was the new found security to the recyclers. And, this is another reason for seeing 2009 as the dawn of the circular economy in the UK.

Improved Stability for “Recyclers” since 2009 – in Circular Economy

Recyclers (businesses which provide municipal, industrial and commercial wastes recycling services) found a new security. It came from 2009, and the attainment of the economic tipping-point.  That tipping-point whereby landfilling became more expensive than most forms of main stream recycling activity. These business have continued to grow since 2009, and in general to prosper.

Unfortunately, the same cannot be said for the specialist companies that process recyclates. In the dawn of the circular economy in 2009, this blog got its prediction completely wrong, when it said:

… “the markets in recyclates will operate on a progressively more stable and normal economic basis.”

2009 Dawn of the Circular Economy – Conclusion

Recycling has always made sense for the environment, but from 2009 on it also became an “economically favourable option” as well.

We can also look forward to the future knowing that the landfill tax (England and Wales) will rise again in April 2019. However, it will now only rise at the rate of inflation.

The new UK era of waste and the dawn of the circular economy, began in earnest in 2009, and continues with new EU targets.

That was the year when waste became a resource of opportunity, and the UK's nascent “circular economy” will soon be 10 years old… 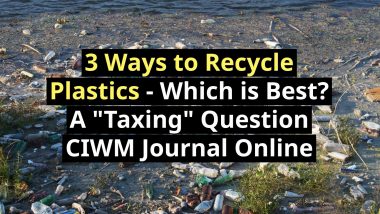