Zero Waste to Landfill and Recycling at the End of 2012

Zero Waste in its literal interpretation is a fabulous idea (as is even the lesser target of “zero waste to landfill”), but not so easy to achieve. Untold billions are being spent by governments worldwide to increase recycling and reduce the amount of waste which ends up in landfills and good progress has been achieved during 2012, especially in the UK.

In the UK the issue of zero waste, zero to landfill, and the zero waste economy, can often seem to be used with close to zero thought and consideration as to how much is already being done and how quickly that sort of a revolutionary change can really be achieved.

In the UK, the respective ministers in Westminster, Edinburgh, the Welsh Assembly, and in Northern Ireland, have each issued their own documents on the subject.

These “zero waste strategic documents”, issued over the last 5 or more years, make pretty tedious reading to those who simply want to see action, and yet there seems to be precious little being said about what good progress is actually being achieved.

The reductions of waste to landfill throughout all the UK have been steadily taking place, and in recent times if you talk to landfill operators who make their living from accepting waste into their landfills you will find them having to cope with reductions which are very significant and make maintaining their own profitability quite difficult in a number of cases.

Zero Waste – When Will It Really Mean “No More Landfills”?

It has to be said that, despite big rises in recycling, zero waste is still a distant dream. But, in general even the biggest landfill haters will accept that they are winning the battle to get landfills “out of their back yards”!

Caroline Spelman, the then Defra Environment Minister in 2010, spoke at the leading waste management exhibition and conference (Futuresource) of the Government working towards a “zero waste economy” and of a “new approach, to waste” but in a pragmatic way which works for the economy in general. So, the concept of what government and the waste management industry means by zero waste has been softened from its initial grass-roots origins, when its proposers really meant “zero”, “zilch”, “nothing”!

Caroline Spelman, said at that time that the zero waste society isn't going to be a somehow “saintly” society where no waste is produced – which the term zero waste has hitherto been assumed by many to be the case – but it is one where all resources are fully valued.

It should however be seen as a society where “consumers make deliberate decisions about waste prevention” and in which there is a change behaviour to better reflect the benefits of keeping our waste as close as possible to the top of the waste hierarchy. That means that rather than even being good at recycling, society must first reduce waste and re-use materials rather than first of all seeking to recycle.

Edwin Poots, Environment Minister in Northern Ireland, who also spoke at Futuresource, said that we should be “aspiring to zero waste”. He went on to mention maximising the use of resources, a more sustainable and dynamic economy and behaviour change.

The Welsh Assembly Government launched its municipal sector plan called “Towards Zero Waste”, in June 2010, and in it they made a clear statement on the subject which indicates that the word zero has been redefined, not to hijack the zero waste philosophy, but in a realistic way to make it more sustainably achievable. The title of the Welsh document in itself hints very strongly that a realistic view on the short-term achievement of zero waste is being taken by our governments. There result is an intermediate 2025 target, by which time there will be a significant reduction in waste. The zero waste theorists will then need to wait for a longer-term 2050 target when “zero waste” will be achieved by more efficient use of resources and waste, but even then it is unlikely that zero waste will mean “no waste at all to landfill”.

The guiding principle behind government policy will need to be waste prevention, while building a sustainable environment and a more prosperous and fair society.

Pragmatism also exists in Scotland, and it is evident in Scotland's Zero Waste Plan, also launched in June 2010. This too contains a resolve that this is more than just a vision for the future, which in reality does not mean “no waste”.

Alongside the broad strategic objectives there are some defined targets for recycling (70 percent) and a maximum of five percent to landfill, both by 2025, as well as some more innovative objectives. The Scottish waste authorities with the help of industry, is:

– developing waste prevention programmes and targets for all waste;
– pursuing a determination to introduce landfill bans on specific materials (eg wood); and
– reviewing use of a carbon metric to better reflect environmental impact (or value) than the current tonnage-based system of measuring waste sent to landfill.

So, all the statements and objectives have evolved from the prescriptive and in our view, meaningless “zero landfill”, and have taken a more pragmatic line, such as “over time we get as close as possible to zero waste”.

ZeroWIN, an industrial network project funded by the EC, sums this discussion up by saying:

“It is important to recognise that zero waste is a target to be strived-for, not an absolute, and it is possible that landfill or incineration may ultimately be the best option for a very small number of wastes”.

So, what for example has been achieved in England over the last period for which figures are available?

The figures are all available on the UK Defra web site here, but we think that the most important metrics, which we quote, are:

– The proportion of local authority collected waste being recycled, composted or reused continued the long term trend, increasing from 40.4 per cent in the financial year 2010/11 to 41.9% in the year January to December 2011.

– The proportion of local authority collected waste disposed of into landfill between January to December 2011 was 39 per cent, [that is] half of the 78 per cent disposed in 2001/02. In tonnage terms, more waste was recycled, composted or reused (10.8 million tonnes) than was landfilled (10.1 million tonnes).

We await more up to date data, but we see the result of all this as being positive. The pragmatists have won the day (as could scarcely be avoided given the difficulty in maintaining existing expenditure plans for new recycling facilities in the current economic circumstances).

The interpretation of all things “zero” has been adjusted not least to take account of the rule that means diminishing returns for the final efforts needed to reduce a small percentage of waste to landfill to nothing. But. also, very importantly, there appears to be a co-ordinated approach across the UK regarding zero waste which for national businesses to function efficiently, must be essential.

Fracking Waste Spills in Youngstown Could be Repeated 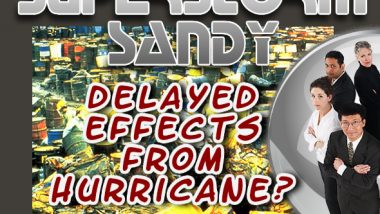