Thermal Treatment of MSW is the single most popular form of municipal waste disposal, and Grimsby's energy from waste plant takes 80,000 tonnes of the area's waste, and has done since 2005.

Before we start let's be sure we know what we are talking about here:

Thermal treatment is any waste treatment technology that involves high temperatures in the processing of the waste feedstock. Commonly this involves the combustion of waste materials. via Wikipedia

Back in 2011 we published the Newlincs Press Release about the Grimsby thermal treatment of waste facility. We continue to include that article below: 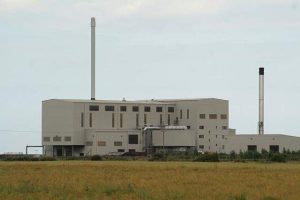 It's a combined heat and power energy from waste (EfW) plant (Thermal Treatment Facility) by Earth Tech (Now Aecom), and located at Stallingborough on the Humber bank near Grimsby. This was part of a £21m integrated waste management facility (IWMF) built for Newlincs Development, the waste management contractor for North East Lincolnshire County Council.

Newlincs is a special purpose company which was set up by Cyclerval (UK) and its parent company, TIRU SA, to run the 25-year concession contract for recycling and disposal of the approximate 80,000 tonnes per annum of municipal and domestic waste arising from the 1 60,000 households within the council area.

The EfW plant provides thermal treatment for municipal solid waste (MSW) as part of an integrated waste management scheme for the area, which also includes kerbside collection, community recycling centres, bring sites and green waste composting. The IWMF site at Stallingborough also has provision for composting facilities and a storage depot for recovered materials for onward transport to recycling centres.

Up to 56,000 tonnes of municipal and household waste is processed each year by the plant and there is a condition in the planning consent that limits the waste to be treated at the plant to that arising only from the North East Lincolnshire Council area. Heat output (in the form of high pressure hot water) and approximately 3MW of electrical power is transferred from the EfW plant to a neighbouring industrial process and manufacturing plant. In this way, the facility provides a local solution to the council's waste recycling and disposal needs while providing a particular benefit to a local manufacturing plant and the wider local community.

The thermal treatment technology for the facility was provided by Cyclerval, based on its oscillating kiln system. This technology is being used with great success on municipal and other waste streams at over 25 sites worldwide, for throughputs between two and 10 tonnes per hour per individual stream. The oscillating kiln differs from the classic rotary kiln in a number of key design details, which improve the functionality of the system and its operating results.

The simple and robust design makes for an economically attractive thermal treatment system with an average availability in excess of 90 percent.

In designing the plant the objective was the delivery of a capital cost-effective plant having the virtues of easy maintainability and a 25-year design life.

Clugston Construction built the civil works to Earth Tech's design and, as the site is located close to the Humber Estuary with superficial silty/clay deposits at ground level, extensive piling was used over the site and the deep bunker was constructed within a braced sheet pile cofferdam.

The process and mechanical and electrical plant was procured from within Europe and the UK, notably the Cyclerval kiln manufactured in France, the boiler and steam piping system from TEI in the UK, the flue gas treatment system supplied by Seghers Keppel of Belgium, the turbine from Peter Brotherhood, the air-cooled condenser from Hamon in Germany and the conveyors from Robsons in the UK. Electrical installation including switchgear panels was by Lloyd Morris, with the control system software developed by Earth Tech in-house.

More recently Aecom has worked with clients CNIM Environmental and Clugstons to deliver complete turnkey construction of a new Energy-from-Waste Facility in Sheffield, South Yorkshire. The new plant incinerates around 28 tonnes per hour of municipal waste, and generates 20 MW of electrical power for internal consumption and export to grid, as well as providing thermal energy for the associated district heating system.