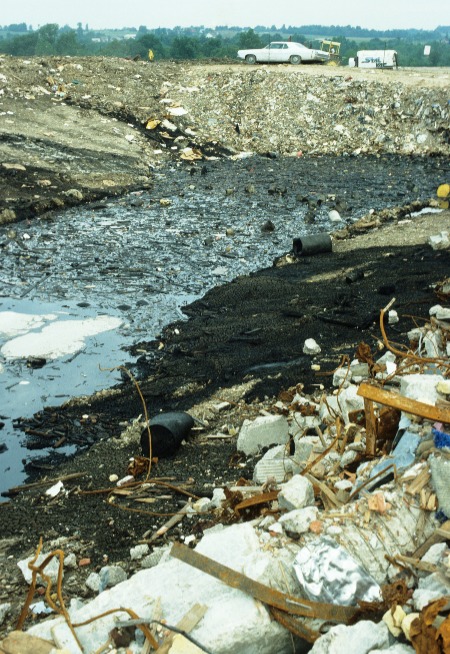 How UK landfill practise changed, due to the “Landfill Tax Price Escalator policy” and the EU Landfill Directive Ban on the co-disposal of Hazardous Waste.


The implementation of the Landfill Directive meant that landfill would never again be available in the UK as readily or as cheaply as it had been.

But, the effect of the regulations was even worse. Over time and implementation of the EU Reach Regulations, the UK and Europe largely lost its Chemical manufacturing Industry to the Chinese, due to the costs of EU regulatory requirements.

Read this to the end to find out how this distressing outcome came about.

So, it had to bring about changes. The chosen route was to simply to make landfill more expensive each year. It became very expensive, and recycling became the lower cost option.

Landfill tax rose to become a source of revenue like never before.

Unsurprisingly, UK industry soon woke up to the fact that they had to recycle or pay more to landfill their waste. Recycling rates rose across the board, and the diversion targets away from landfill were met.

Back in 2011 when this article was first published we wrote the following:

The Labour government’s “Landfill Tax Price Escalator policy” was the start of the huge annual price rises. Rises which have now brought taxation in the current year (2011) to £57/tonne for all industrial and commercial waste, including Municipal Solid Waste (MSW) being sent to landfill.

Another part of the big change, which brought a sea-change to the use of landfill in the UK, was the outlawing of all hazardous waste disposal to the same landfills as industrial and commercial/ MSW. This has been implemented, barring the small quantities of HazWaste mixed in with non-hazardous MSW, such as battery waste and electronic waste which were reduced by other measures, at source.

Until this change to UK Landfill Practise, all wastes other than a few of the most toxic of all wastes, had been co-disposed along with household waste.

Incidentally, the wastes accepted until then had omitted the most hazardous waste types. UK domestic, industrial and commercial waste, landfill operators had for many years refused to accept the most reactive hazardous wastes, and for example, those hazardous wastes laden with heavy metals. Furthermore, their waste management licences under which they were regulated also prevented this.

That means that the toxic waste, liquids and solids had previously been spread into the general waste. Only so much liquid waste was disposed as could be mopped up by absorptive capacity within the tipped refuse. It was well-controlled, it was cost-effective and worked well.

The EU Landfill Directive prohibited hazardous waste co-disposal, not recognising that low-grade haz-waste categories had been successfully neutralised through co-disposal in UK landfills for many years.

The UK had to change from a system which successfully allowed haz-waste to react and stabilise within the body of the waste. It was considered a cheap and in general relatively safe way to dispose of all but the most toxic wastes, which were sent to specialist incineration facilities set-up for the purpose of accepting the most hazardous wastes produced in the UK at the time.

The UK waste industry accepted it as necessary to harmonise UK regulations with the rest of the EU.

Principles applied to acceptable Hazardous Waste Co-disposal in the UK with Household, Industrial and Commercial (Non-hazardous) Waste before the EU Landfill Directive:

If the percentage of toxic waste was kept to below about 20% of the waste landfilled by weight, and mixed into the waste well away from leachate drainage wells in lined and capped landfills this gave no problems of any significance.

In fact the move away from co-disposal was a political one, and acceded to by UK politicians of the day as a compromise for adoption of other UK measures throughout Europe.

It was not scientifically or environmentally considered by the UK waste industry to be any better than co-disposal.

In other words, the UK had to do it in order to comply with long-standing EU practise which their waste industry was not about to change just because the UK and other nations had joined the common market.

It was again, the Landfill Regulations which were implemented to make the necessary UK changes in order to comply with the requirements of the Landfill Directive to ban the co-disposal of hazardous and non-hazardous waste from 16 July 2004.

Hazardous and non-hazardous wastes have since then be dispatched to mostly separate and appropriately designated sites, possibly with the exception of asbestos waste, which was often a case of providing disposal to separate haz-waste cell at the same landfill site location.

Mono-disposal has ever-since been creating hazardous waste “time-bombs” throughout the UK. However, no concern about this was shown at the time, nor has been raised subsequently, which is quite remarkable.

The new EU Landfill directive based Waste Regulations also imposed a set of “waste acceptance criteria” (WAC) detailing the types of waste that can be accepted at landfill sites. Most waste, with the possible exception of municipal waste, now has to meet the WAC.

The Regulations also required hazardous wastes, as identified in the European Waste Catalogue (EWC) to be pre-treated to reduce their quantity and hazardous nature before landfiliing.

To complete the picture for you, the producers of waste are subject to a Duty of Care under the Environmental Protection Act 1990 (EPA) to ensure waste does not escape from their control, is only passed to persons authorised to take it, and is accompanied by written descriptions and correctly completed waste transfer notes.

Together with pre-existing legislation relating to fridges, vehicles and batteries, the Regulations effectively made almost every business a hazardous waste producer.

At that time there was a lot of concern that businesses would simply not be able to find enough hazardous waste landfill capacity to dispose of their waste.

People actually suggested that queues would form at the few remaining Hazardous Waste Landfills left holding a licence. Concerns were raised that immediately after implementation of the rules banning co-disposal industry would not cope.

If that did occur anywhere, it never hit the press. Since then, UK manufacturing factory closures (which were no doubt partly due to the higher cost of hazardous waste disposal to landfill), have eased the UK haz-waste burden. In effect the UK exported the industries producing haz-waste to China where there were no EU imposed rules, but not for any scientific reason.

Another result has been to see much better incineration options and recycling by closed-loop waste reprocessing [now known as “the circular economy”] is becoming far more common. In combination with the REACH Regulations which make using hazardous materials in products much more difficult to sustain.

How EU Rules Closed the UK (and EU) Chemical Industry Down

These measures have reduced the ability of EU businesses to compete with the developing nations, by raising EU costs. This has of course greatly reduced the quantities of hazardous waste generated by UK industry, but at the cost of the UK’s chemical manufacturing industry.

In fact, the authors opinion is that the operators of hazardous waste landfills and hazardous waste incinerators who were investing heavily in new mono-disposal facilities when the new regulations lost out.

Several new landfills were introduced a few years after the co-disposal ban, in the hope of high demand for their void space.

They would have made high profits, but the author considers that they would have been largely disappointed, due to the closure of so much UK chemical manufacturing capacity.

That was the result EU regulatory requirements politically imposed. Regulations which have not been scientifically proven to have been necessary.

The UK handed it’s chemical industry to the Chinese on a plate, as a result of costs imposed by the EU waste regulations, for no good reason.