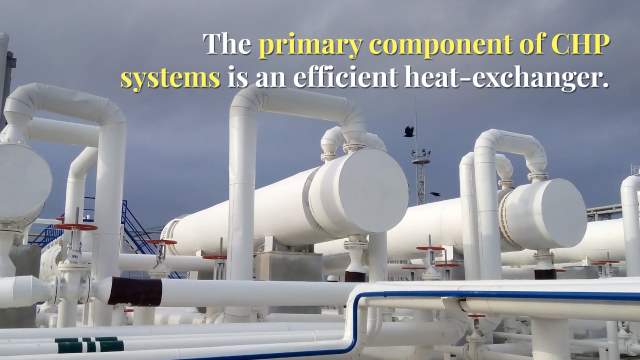 What is District Heating and Cooling (DHC)? Combined Heat and Power Systems Explained 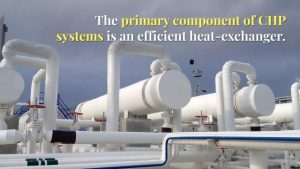 We also created a video on this subject, and based upon the first part of this article, and which we have added below. Once you have watched the video (1 min. 30 seconds) return here and continue to scroll down the page, where we have a ton of fascinating facts for you about District Heating and Cooling.

According to Eurostat more than 80 million tonnes of household and similar wastes were sent to landfill in 2012 (more than 30% of the amount of waste treated in Europe) instead of being re-used, recycled or recovered.

Similar waste streams such as those from offices, shops and factories are also landfilled. 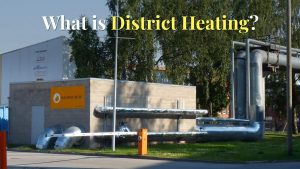 More than 400 Waste-to-Energy plants are currently operating in Europe, treating about 78 million tonnes of waste a year. This represents a calorific heat value of between 470 and 1,240 PJ. Enough to heat London for five years.

Currently, less than half of this potentially usable energy is recovered as electricity and heat, which means that there is still significant potential for development. This is particulalrly beneficial if more heat could be recovered from existing Waste-to-Energy plants by linking them to DHC networks.

Currently, there are more than 6,000 District Heating and Cooling (DHC) systems in Europe.

What is District Heating and Cooling? District Heating and Cooling is where a heat source (hot water) is used to supply heat to homes and businesses via a district heating scheme. That means hot water pipes which are very well insulated to avoid heat-loss en-route from the hot water while it is pumped to the heat users. Cooling is much rarer in district heating schemes, but it is a potential use, when cold water can be delivered in the summer.

There are many examples proving that District Heating and Cooling is a viable, readily available solution for a quick transition from individual heating based on fossil fuels to a combination of more efficient, renewable and competitive energy supplies.

Yet there is room for further improvement and, in particular, for expansion.

Studies suggest that the potential for using heat from waste is equivalent to 200 TWh per year by 2050, which means that there are still opportunities for further development. 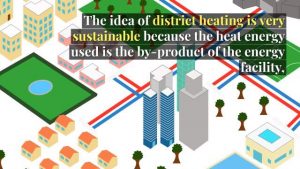 Also, it is expected that District Heating Systems will function as the backbone of tomorrow’s Smart Cities.

District Heating Systems will be used as the infrastructure to provide efficient exchange and redistribution of energy, including better use of local resources like waste. via CEWEP

Combined heat & power (CHP) systems, can convert a single fuel into both electricity and heat in one process.

By using waste heat, CHP plants can reach efficiency ratings as high as 80%, compared with the efficiency of gas-fired power stations which is around 50% in the UK. via What is District Heating and Cooling (DHC)?

CHP is an energy efficient technology that generates electricity and captures the heat that would otherwise be wasted to provide useful thermal energy—such as steam or hot water—that can be used for space heating, cooling, domestic hot water and industrial processes. CHP can be located at an individual facility or building, or be a district energy or utility resource. CHP is typically located at facilities where there is a need for both electricity and thermal energy.

Nearly two-thirds of the energy used by conventional electricity generation is wasted in the form of heat discharged to the atmosphere. Additional energy is wasted during the distribution of electricity to end users. By capturing and using heat that would otherwise be wasted, and by avoiding distribution losses, CHP can achieve efficiencies of over 80 percent, compared to 50 percent for typical technologies (i.e., conventional electricity generation and an on-site boiler). via CHP – US EPA

What is District Heating and Cooling (DHC)? Its generally another name for Combined heat and power (CHP), also known as cogeneration, is:

CHP technology can be deployed quickly, cost-effectively, and with few geographic limitations. CHP can use a variety of fuels, both fossil- and renewable-based. It has been employed for many years, mostly in industrial, large commercial, and institutional applications. CHP may not be widely recognized outside industrial, commercial, institutional, and utility circles, but it has quietly been providing highly efficient electricity and process heat to some of the most vital industries, largest employers, urban centers, and campuses in the United States. It is reasonable to expect CHP applications to operate at 65-75% efficiency, a large improvement over the national average of ~50% for these services when separately provided.

via Combined Heat and Power Basics | Department of Energy

Today, the Office of Energy Efficiency and Renewable Energy (EERE) announced up to $10 million to conduct research and development activities to further the utilization of cost-effective, highly efficient combined heat and power (CHP) specifically designed to provide support to the electric grid.

CHP is a suite of predominately gas-fired distributed generation technologies that produces electricity and thermal energy onsite, providing the user with more efficient and lower cost electricity while also increasing site reliability and energy security. CHP can also reduce line losses and strain on grid infrastructure. via Department of Energy

U.S Combined Heat And Power Systems Market to Spread a Predictable Worth of US$ 277.3 Mn by 2024

According to Persistence Market Research’s recent market outlook – “U.S. Market Study on Combined Heat and Power (CHP) System for Data Center: Commercial End Use Segment Expected to Witness Steady Growth from 2017 to 2024 ,” the combined heat and power (CHP) system for data center market in the U.S. will grow at 3.4% CAGR through 2024. The market in U.S., although estimated to witness moderate growth throughout the assessment period, will continue to hold the highest value share in the global market. Revenue sales of CHP systems for data center will be predominantly high in California, New York, Washington, Texas, and Massachusetts. By 2024, the market for CHP system for data center in the U.S. is likely to reach US$ 277.3 Mn. The overall Y-o-Y growth rate throughout the forecast period is anticipated to be modest, within a range of 3.8%-4.0%. via U.SCHPWorth

The report, titled Micro Combined Heat & Power Market Research Report states that the demand for this in the market is increasing substantially due to the growing awareness among individuals regarding the latest technological advancements and innovations. It presents a detailed assessment of the historical and the current performance of this market, taking the key trends, driving factors, limitations, and significant opportunities into consideration. 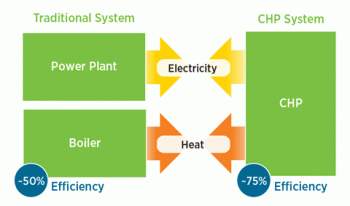 Combined Heat and Power (CHP), or cogeneration, is the simultaneous generation of electrical or mechanical power and useful thermal energy from a single fuel source. CHP systems use thermal energy that would have otherwise gone to waste, thereby raising the total efficiency of the fuel source. This increase in efficiency can lead to reduced fuel use, pollution, and greenhouse gas (GHG) emissions when compared to systems that obtain their power and thermal energy separately.

CHP's potential benefits for California include:

What is District Heating and Cooling: Top 10 Things You Didn’t Know About US Combined Heat and Power

10. Often called cogeneration or CHP, a combined heat and power system provides both electric power and heat from a single fuel source. While most power plants in the U.S. create steam as a byproduct that is then expelled as wasted heat, a CHP system captures the energy that would normally be lost in power generation and uses it to provide heating and cooling to factories and businesses.

9. Every year, more energy is lost as wasted heat in power generation in the U.S. than the total energy use of Japan. CHP cuts this amount of wasted energy nearly in half.

8. CHP has been used in the United States for more than 100 years since Thomas Edison used it to power the world’s first commercial power plant. Decentralized CHP systems located at industrial and municipal sites became the foundation of the U.S.’s early electric power industry. However, as power generation technologies advanced, the power industry began to build larger central station facilities to take advantage of increasing economies of scale.

7. while consider the question of what is district heating and cooling. Did you know? The U.S. Capitol Building and congressional buildings will soon be powered by a CHP plant. This summer, the Architect of the Capitol started designing a CHP plant that would generate approximately 18 megawatts of electricity and provide steam heat to congressional buildings. Once completed, the Capitol will join the list of other government organizations, like the General Services Administration and the National Institutes of Health — that operate CHP facilities.

5. Currently, the U.S. has an installed capacity of over 82 gigawatts of CHP at more than 4,100 industrial and commercial facilities. That’s equal to 8 percent of the U.S.’s current generating capacity.

4. Many hospitals, schools, university campuses, hotels, nursing homes, office buildings and apartment complexes are turning to CHP systems to save on energy costs, increase energy reliability and cut carbon pollution. As of 2012, commercial buildings and institutional applicants represented 13 percent of CHP systems in the United States.

3. Last year, President Obama set a goal of 40 gigawatts of new, cost-effective CHP by 2020. Meeting this goal would save American manufacturers and companies $10 billion each year in energy costs, result in $40 to $80 billion in new capital investment in plants and facilities that would create American jobs, and reduce carbon pollution by 150 million metric tons — that's equal to the emissions of more then 25 million cars.

2. Since 2003, the Energy Department has been working to grow the CHP market through technical assistance partnerships, most recently with seven new projects that will operate regionally and collectively across the U.S. Between 2009 and 2012, the partnerships have provided technical support to more than 440 CHP projects, helping U.S. manufacturers, businesses, hospitals and universities understand how CHP can improve their bottom lines, lower energy bills and help protect our air and water.

1. During and after Hurricane Sandy, CHP systems played a key role in enabling hospitals, universities, schools and residential buildings to continue operations when the electricity grid went down in the hardest-hit localities — proving that CHP is a sound choice in making our energy infrastructure more resilient in the face of extreme weather events.

We hope you are fully aware now of what is district heating and cooling, but if not please use our comments box below to ask us a question. 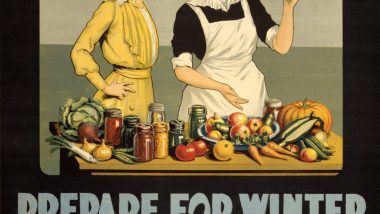 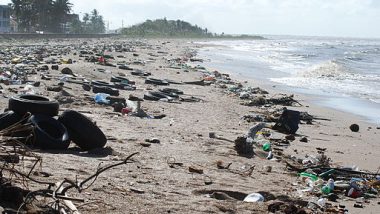