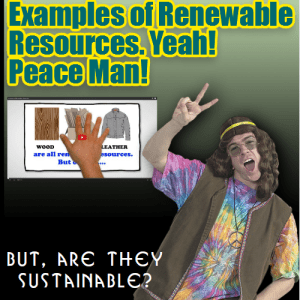 Examples of Renewable Resources are things like water, soil, air, forests and animals, to put it simply. A commonly accepted definition is that a natural resource is a renewable resource if it is replaced by natural processes at a rate comparable or faster than its rate of consumption by humans.

Solar radiation, tides, winds and hydroelectricity are in no danger of a lack of long-term availability, so it is reasonable to describe them as renewable. Renewable resources may also be used describe materials such as wood, paper, and leather, if harvesting is performed in a sustainable manner. In other words wood is renewable, but only if more forests are being planted to replace the trees that are being felled.

So, we might say that renewable resources are those which can be replenished over time by some natural process, including farming. Such resources have the ability to be renewed over a short period of time.

We suggest that you watch our video below, which explains and gives examples of renewable resources:

To also watch this on YouTube go to our “Examples of Renewable Resources” video.

A Definition of Renewable Energy Sources

“SUFFICIENT ENERGY IS A BASIC NEED”

Access to sufficient energy has become a matter of course for life in economically well-developed countries. There is hardly any area of ??life where we do not consume energy.

There is enough renewable energy for everyone! The energy we need for electricity, heat and mobility can be covered by renewable energy sources. Technology and potential for the use of regional environmentally friendly energy sources are sufficiently available. It is up to us to use them efficiently and to adapt our user behaviour in the best possible way. via www.aeev.at

Geothermal energy is often classed as renewable and as it is provided by the heat of the Earth, and comes from under the ground it is in reality also an inexhaustible energy source.

Renewable resources are an important aspect of sustainability. According to the U.S. Energy Information Administration, the most frequently used renewable resources are biomass, water, geothermal, wind and solar. Unlike using fossil fuels, we can regenerate or replenish these resources. Although biomass in the form of wood once supplied 90 percent of U.S. energy needs, all renewable energy sources combined supplied only about 8 percent of in 2009.

Let's think about the gasoline we use in cars. Gasoline is a non-renewable resource, which means that we're going to run out of it! Someday, there won't be any gasoline left. We'll have to think of something else to use to run our cars!

Now let's think about trees and wood. Wood is a renewable resource. So long as we take good care of the forests, we will never run out of wood!

Renewable resources are energy sources that our planet and our living organisms use, but that can be recreated by natural processes once they're used up. In this case, the intentional planting of new trees, for example, would still be considered “renewable” even though human intervention made it possible. Some renewable resources take long periods of time to regenerate, like those trees, while others take literally no time, like sunlight or wind.

Global attention has been drawn recently to the need to switch to a higher reliance on renewable resources than our existing practices of making use of sources like fossil fuels. Renewable resources are in theory unrestricted, and the majority of the types that are in use are far less contaminating than nonrenewable fuel sources.

Solar power is the conversion of sunshine into usable energy. It's done using solar panels which convert the sun's light and radiation into electrical power. Solar power has exceptionally high capacity since it is incredibly available. According to the science journal “Nature,” the sun provides Earth with more energy in a single hour than human beings use in a year.

Fossil Fuels: coal, oil, gas and soil, rocks, minerals. As soon as they have been removed from a mine or washed away it takes a VERY long time for them to form.

We have counted on fossil fuels for our energy requires because, traditionally, these fuels have actually been relatively affordable, and lucrative for developers. With rising fuel rates, concerns about environmental effect and growing political issues about oil providers, renewable resource is gaining in importance.

Renewable resources are natural sources that can not be reduced. Examples consist of solar, wind, hydroelectric, biomass and geothermal. Fossil fuels like coal, oil and even clean-burning gas do not exist in limitless supply. Someday they will certainly be gone. In extra to endless accessibility, renewable resources produce less ecological effect, specifically pollution.

In the world we come across 3 major types of energy resources: Perpetual, Renewable and Non-Renewable. Examples of Perpetual energy resources are wind and sunshine which continue to be consistent despite of unlimited use. Renewable resources are energy carriers which can be replenished once more and once again by utilising physical and bio-geochemical cycles. Non-renewable resources can not be renewed. A good example is nonrenewable fuel sources.

Renewable energy refers to power created by a renewable source. When the energy is generated, the resource is not diminished or used up. They are normally replenished, and can either be handled so that they last for life, or their supply is so enormous human beings can never ever meaningfully deplete them. Unlike fossil fuels, renewable resource sources do not launch CO2 as a by-product into the environment. As the amount of nonrenewable fuel source resources in the world reduces, it is ending up being increasingly important to discover and use alternative fuels.

In the US, Alternative Energy is used and in basic it suggests the like renewable, suggests anything other than deriving energy through Fossil Fuel combustion. Alternative energy is also a natural resource ends up being a renewable resource when it is changed by natural procedures at a rate which is much faster than its usage rate by human beings. Solar radiation, tides, winds and hydroelectricity are the sources which are of long-lasting accessibility. Renewable resources might consist of mean products like wood, paper, and leather, if their harvesting is carried out in a sustainable manner.

Some natural renewable resources such as geothermal power, fresh water, timber, and biomass must be used with care to stay clear of exceeding the capability to replenish them. A life process supplies an organised means of computing renew-ability.

Potentially, renewable natural resources can sustain collecting forever. However, to achieve a condition of sustainable usage, the rate of harvesting must be smaller than the rate of renewal of the resource. For example, flowing water can be sustainably used to produce hydroelectricity or for irrigation, as long as the usage does not surpass the capacity of the landscape to yield water. Likewise, biological natural resources such as trees and hunted fish, waterfowl, and deer can be sustainably gathered to yield valuable items, as long as the rate of cropping does not go beyond the renewal of the resource.

So, to sum up, we will just state that a renewable resource is a natural resource that can replaced through biological or other natural procedures and replenished after some time. They belong to natural environment but they are jeopardised by industrial developments and over population. Solar radiation, biomass, tides, geothermal, and winds are examples of renewable resources.

Yet Examples of Renewable Resources

Unlike fossil fuels, we can regenerate or replenish these resources.

With the rising cost and decreasing availability of nonrenewable fossil fuels, renewable resources are receiving increasing attention. … via SFGateHome Guides

These are just a few. Many more are listed at RenewablesYourDictionary

A nonrenewable resource is a resource that there is a fixed amount of, or ones that humans cannot produce, replace, re-grow,regenerate, replenish, or figure out how to recycle and reuse in a quick manner. Human consumption is immediate and continual, but Earth and Nature makes most resources continually but very slowly.

Generally, the term “non-renewable resource” applies first to fossil fuels that take millions of years for Earth and Nature to make, and not quickly enough to replace what is used. Examples of nonrenewable resources are anything mined from the Earth.

In the field of energy and heating, that includes Fossil Fuels such as:

Once you burn them or use them they can't be used again. In contrast, resources such as timber (when sustainably harvested) or metals (which can be recycled) are considered renewable resources, for the most part.

However, we cannot be sure when or if these might run out.

In the field of materials,

Once you have mined what humans can reach, there's no more until the earth produces it or humans figure out how to “dig deeper” to find another area of that resource. … via Answers

There are many examples of renewable resources of energy that are renewable and considered to be environmentally friendly and harness natural processes. These sources of energy provide an alternate ‘cleaner’ source of energy, helping to negate the effects of certain forms of pollution.

All of these power generation techniques can be described as renewable since they are not depleting any resource to create the energy. While there are many large-scale renewable energy projects and production, renewable technologies are also suited to small off-grid applications, sometimes in rural and remote areas, where energy is often crucial in human development. via Listverse

What Makes a Resource Renewable?

A renewable resource is defined as a natural resource that renews itself at a rate that is faster, or equal to the rate of consumption, according to Oregon State University. Renewable resources differ from resources that once depleted never return, such as fossil fuels. The use and cultivation of renewable resources helps to minimize the impact humanity has on the Earth while supporting a growing population, notes Investopedia.

According to the US Department of Energy, the costs of clean energy technologies like residential and utility-sized solar, land-based wind, and LED light bulbs have fallen by anywhere from 40 to 90 percent in the United States since 2008. The U.S. Energy Information Administration (EIA) declared back in 2015 that domestic energy use has “the highest renewable energy share since the 1930s, when wood was a much larger contributor to domestic energy supply.”

It’s an exciting time for advocates of renewable energy resources. Bloomberg’s forward-looking analysis on how the global energy market could shift in 2018 declares:

Renewables are no longer “alternative energy.” Solar power is competitive with fossil electricity in more and more places every year—watch China, India, and Chile in 2018. Global demand for the sun reached a new high this year, and solar is that rare thing that liberals and many free-market conservatives in the U.S. can agree to love.

The practical implications of cost-competitive renewable energy are even more exciting. California academics at The Solutions Project recently found that, with the right incentives, the world could run entirely on electricity from renewable resources by the year 2050.

O the many examples of renewable resources, solar will be one of the biggest, possibly the largest. In the United States, that means that there will be a lot of solar power:

2 Responses to Examples of Renewable Resources