What if we all could “just separate out plastic bags and containers from our rubbish”, let the nice council people take it away and without having any negative impact on the environment?

Sounds good, doesn’t it? Of course!

But the plastic problem isn’t such an easy one to tackle, experts claim. Too bad!

However, we can make a dent and start to take some actions to recycle the worst of the plastics items we use day to day. Scroll down to find out 5 ways how…

Did you know every single plastic bottle produced by the soft drinks companies will remain on the planet for at least 450 years if not longer? Yes, it’s shocking but true! Plastic, unlike metal or glass, cannot be recycled infinitely. After just a few times getting recycled, it will be discarded as rubbish, where it will take some centuries to slowly degrade (not good for our environment at all). Or even worse – it gets dumped into the oceans or gets burnt thereby instantly polluting the environment in which not just we, but the whole ecosystem of organisms live!

But, first, let’s understand why should we even be concerned about this.

Why We Need to Stop Sending Unsuitable Plastics for Recycling

Disposable cups float on a river while a fish swims among them.

Carbon emissions emerge from every single stage in the whole plastic lifecycle – from the use of fossil fuels that are used to produce it, it's waste management and disposal. We already know that plastic has been threatening the global environment and putting human health at risk since more than a few decades now.

But when you send the wrong type of plastic material for recycling, it becomes another nightmare for recyclers to separate it from the recyclable waste. There’s even a possibility of having some kind of contamination spread in this process.

This is why it becomes important for you to confirm with your local authorities what kind of plastics they consider as recyclable vs non-recyclables (good vs bad plastics).

If you don’t want to deal with this issue, make regular rubbish clearance a priority. It’s easy to find companies that do rubbish removal in London. Let them do it for you. What could be better than this?

Addressing the Confusion and Myths Around Recyclable Plastic

Too often bottles bob-around on our rivers, until washed out to sea during high rainfall periods.

Even though most people are trying their level best to recycle plastic, but each of the councils across the UK has different rules around it. They also employ different junk removal companies to collect and sort out the plastic waste for them.

In some areas, you can send empty margarine tubs for recycling and in other areas, you can’t. No wonder it has left many residents confused over what can actually be recycled and what can't. Too bad!

To understand this topic better and address all the confusion, here’s a list of plastics along with their recyclable status.

Bags (known as “film” to recyclers) floats in the sea. See below, where a turtle is shown eating a plastic bag.

You can typically find this kind of plastic in:

The sand of many beaches like this one, are now littered with small pieces of plastic. The smallest fragments are often called micro-plastics.

There are 2 types of polystyrene: one is hard, brittle plastic and the other one is expanded polystyrene (lightweight, insulating, water-proof plastic)
Here are some examples of items that have polystyrene:

Here are some examples of items that have expanded polystyrene:

Other non-recyclable plastics include composites such as crisp wrappers, bioplastics, polycarbonate (which contains BPA) and plastic-coated wrapping paper.

Recyclable Plastics (Better for the Environment) 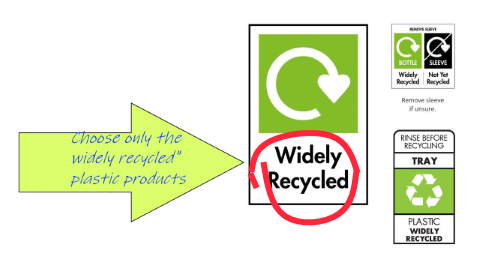 You probably already know this – PET plastic is one of the most widely accepted single-use recyclable plastics. This is the type they use for manufacturing single use clear plastic bottles.
Here are some examples: 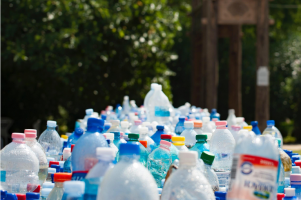 Even though HDPE is recyclable plastic, but it’s good to check with the Local Authority if they accept it for recycling in your area.

You will find this plastic in stiff coloured plastic bottles/tubs.

Here are some of the examples:

This is hard but flexible plastic. Just like HDPE, LDPE can also be recycled. Again, you will need to check and confirm with your Local Authority if it’s recycled in your area.
Here are some examples:

Just like HDPE and PDPE, PP can be recycled but you will need to check with the Local Authorities to make sure it’s recycled in your area.

A sea turtle found entangled in a discarded fishing net.

Here are some examples:

In case you are not sure which plastic bag or container comes under which category, have a look at the labels placed on them. For example, here’s the label you will typically find on non-recyclable plastic:

If you are still not sure, why not let companies that are experts at junk removal rubbish clearance do it for you?

Let’s come to the most important section of the article – what you can do to help in this regard. Here are some tips to guide you in the right direction.

A sea turtle apparently eating a plastic bag. Sadly, turtles are thought to frequently mistake poly-bags for the jellyfish they love to eat.

It’s quite apparent that we need to change the way we think of the plastic waste. It’s not just about recycling, but also avoiding its use as far as possible.

That’s what we need to do if we truly want to mitigate the devastating impact of plastic on our environment.

As a result, governments will be able to stop the production of plastics entirely in the times to come.

All it takes to achieve this feat is a decision to put the future of the human race way above a tiny bit of convenience. We need to acknowledge the huge scale of this plastic mess we have got ourselves in if we really want to see an environmental change – and we need to do so before it’s too late.

Attribution: All images except for the top image of a diver swimming in plastic pollution, are from the Creative Commons ISPRAVIDEO Indicit “Marine litter impact on sea turtles” Video on YouTube produced for the EU. The top most image is also based a clip from a YouTube video. In this instance, the video is titled “Diver Films Shocking Sight Caught on Tape” by CR 2.0.