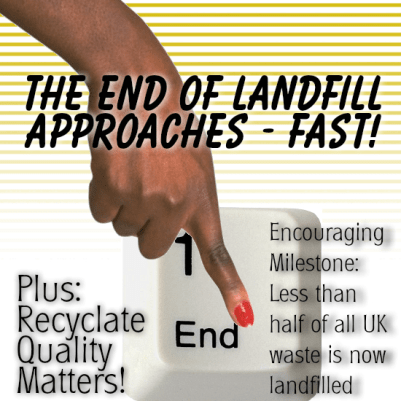 Recyclate quality is one of two interesting topics in the News this month, within the waste industry in the UK. Both subjects have served to point up the rapid progress being made in the UK away from landfilling our waste. The use of recyclate as the main raw material for recycled products has grown to the extent that serious attention is being given to impurity levels in order to improve recyclate consistency and quality, and the tonnage of landfilled waste has been for the first time ever in the UK been less than the tonnage recycled. This being the case, we thought that we would blog about both subjects. 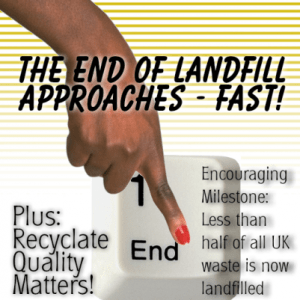 Companies that buy recycled materials in the UK are suffering a loss that hasÂ previouslyÂ not been accounted for. It's disposing of the contaminated material which comes with the recycled material that they thought they were buying an replacing that material,Â presumablyÂ by having to buy more of it.

The Resource Association has announced in aÂ recentÂ report that this cost is significant at an estimated Â£51m annually, even ib the prices of today it is a sizeable sum.

The Â£51m relates to the cost impact of that poor and inconsistent quality recyclate which is the state of the art recycled material used a group of UKÂ re-processorsÂ  This is the first time that this hidden cost has been estimated,apparently it has no in the past been allowed for in any of the debate on waste collection efficiencies. Furthermore, you won't see it even noted in WRAP'S otherwise excellent 2009 analysis, Choosing the Right Recycling Collection System.

So are there clear instances which can be quoted by way of illustration as to where these costs arise? It not easy as no twoÂ re-processorsÂ are the same, but, in general terms, the costs are associated with items such as:

What does the contamination consist of? It is usually other potential recyclate material which during processing failed to make it into the store for that other recyclate stream. It is “contamination” solely due to the fact that it is just recyclate in the wrong place. State of the art equipment is only good up to a point, and unfortunately our separatingÂ technologyÂ  despite rapid improvement in its design in recent years. Is still notÂ capableÂ of separating each and every particle into the correct recyclate stream. The results are costly as this figure shows, and the seriousness of imperfect material purity is sever, particularly after chemicals or heat have been applied.

This leads us to realize that estimates of cost also need go on to account for the additional energy needed to create waste during these further processing stages when such process contamination issues occur, and the cost of waste labour time in the factory. And, here we have not even been talking about the additional energy, wear and tear, on such equipment as shredders, and pulpers.

We have previously posted articles on this blog saying that “the end is nigh for landfill”, but not so far pointed out how rapidly landfilling activity is now diminishing in the UK. Right now we seem to be at a watershed for landfilling in the UK, largely due to the progressive escalation of landfill taxes, which means that waste producers are rapidly moving toward recycling their waste in order to save on waste disposal costs to landfill.

According to the CWIM's Chief Executive, Chris Murphy, writing in the February 2013 edition of the CIWM Journal, he indicates that the UK is alerady beyond what he calls, “the tipping point of our landfill dependence”.

That's because Defra announced towards the end of 2012 that local authorities in England recycled, composted or re-used over 10m tonnes of the waste they collected, which amounted to more than was landfilled for the first time since records began.

This was accompanied by news that falling volumes of residual waste resulted in the closure of over 30 landfill sites last year. This isn't going to be a unique year, as this trend will continue. In fact, almost two years ago now it was estimated that 300 of the UK's landfills would close within a decade as they come to the end of their “natural lives”.

For UK industry to turn its back on landfilling has to be a good thing in its own right (for the benefit of the environment, but also as it is directly linked to increased recycling, re-use and composting).

The UK waste industry in seeing these changes is doing no more than delivering government policy to comply with the requirements of the Landfill Directive, very effectively aided by the very high landfill tax charge which is levied as from April 2012 at a standard rate for active waste of Â£64 per tonne.

Landfill nostalgists like your author are not entirely without conflict in our minds on this. We still hold aÂ certainÂ perverse feeling of endearment for landfills. The operator of a well run landfill now, as in the past, has every right to feel proud of his/ her achievement. There is also little doubt that many well run landfills have caused very little by the way of problems.

OfÂ courseÂ  the Chancellor is another person who may wish, for financial reasons that landfill activity was not diminishing quite so quickly. The halcyon days of high landfill tax revenues will not last much longer, and he'll be looking for yet more cuts elsewhere in theÂ absenceÂ of this hitherto, no doubt very welcome tax income source.