The benefits of anaerobic digestion in waste treatment and management are now well known.

Not only does this type of waste management reduce gas emissions, but the biogas which is produced can be used as a type of renewable energy. That’s sustainable energy which can be used to replace fossil fuels, and at the same time as producing an excellent crop and garden fertiliser.

For this reason, and others, anaerobic digestion is widely regarded to be one of the most effective methods of converting waste from rubbish to a resource.

Now, a small group of specialist companies which belong to the AeroThermal Group in Dorset have taken anaerobic digestion one step further, developing a new type of AD facility which will utilise autoclave processing technology alongside conventional methodologies to revolutionise the anaerobic process in a way the world has never seen before.

About the Lee Moor Waste Plant

The new autoclave processing AD facility, to be situated at Lee Moor near Plymouth, was approved in 2011 and predicted to open in 2013. Latest news from the site confirms that the Lee Moor waste plant is expected to be fully operational by April this year (2013), and has the support of not only the government but also a local protest group which was concerned about the possible impact the plant would have upon both the local and national environment.

Early assessments of the site which were carried out using the AERMOD model concluded that the plant’s emissions would be above the minimum standards and will have no significant environmental impact.

The Potential of Autoclave Processing and AD Technology

Autoclave processing is expected to make the anaerobic process as much as four times faster than it ever has been before, resulting in a much greater output of renewable energy and capable of saving up to 20,000 tonnes of CO2.

Because an autoclave is capable of operating like a high-pressure cooker, it will mean that more diverse and complex types of waste can be processed at Lee Moor, including cardboard, food, glass and plastics.

After treatment, the waste can be easily separated and either recycled or converted into biogas; electrical production will be channelled into the national grid and heat will be repurposed back into the plant itself, thereby reducing the amount of operational energy required by the autoclaves.

Lee Moor Looks to the Future

There has always been an ongoing and recognisable need for improved waste management strategies and facilities in the UK. And as respected national waste management companies, such as www.gbmuk.com, recognise that the need has become acute, the new Lee Moor autoclave and AD facility near Plymouth promises to meet this need head-on.

Not only are more diverse, unsorted, types of waste efficiently and simultaneously processed at Lee Moor. , but it will result in a greater output of renewable energy. Add to this the nutrient-rich fertiliser and it’s easy to appreciate that this will channel vital resources back into the surrounding land. 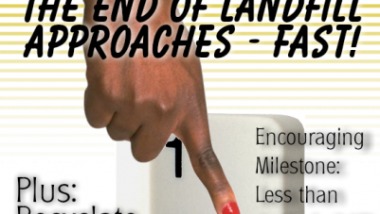 Fracking Waste Spills in Youngstown Could be Repeated