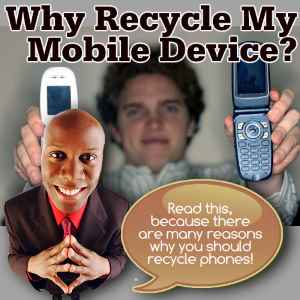 Mobile Phone Recycling: What Should You Do With Your Old Mobile Phone?

Mobile phones are in high demand. New model releases take place every year, sometimes more often and many people buy a new phone every 2 to 3 years. They replace their old models with the latest innovations, creating a huge burden on earth's resources.

But, what happens to those old mobiles?

Usually, they are locked away to gather dust, or thrown away and added to what is known as e-waste (WEEE).

But what is e-waste or WEEE?

For those that don't know, e-waste is a term used to describe electronic items either nearing or at the end of their life cycle.

Items range from everyday ones such mobile phones, tablets, and laptops to stay at home items like kitchen appliances and TV's.

E-Waste has become an increasingly important sustainability issue for a number of reasons. A big one is that WEEE contains some severely harmful toxins. Another factor is being able to re-capture substantial reusable energy, from its materials.

[Info: Don't forget to scroll down to the bottom of this the page to view our engaging infographic!]

So why should we care about recycling our old phones?

Well, for one they contain vital resources that can be reused for greater purposes. Just 6,000 mobile phones contain over 100kg of copper, 3.5kg of silver, for starters. But that not all, the list goes on! – Over 100g of palladium, and over 300g (!) of gold.

These are precious metals, meaning they have high economic and reusable value e.g. High-end jewelry.

If that's not enough, then consider the environmental implications of recycling an old mobile.

If just 1 mobile battery (lithium-ion) was recycled, it could prevent the contamination of 60,000L of water.

For perspective, that is the same amount of water needed to fill 3 Olympic sized swimming pools!

Water isn't the only beneficiary here though, as 1,000,000 recycled mobiles would have the same affect on green house gas emissions as taking 33 cars of our streets.

We all benefit from Mobile Recycling from energy release as well. The materials used in 42 mobiles can be reused to provide enough energy to power a household for an entire year!

Money is also there to be made, as many recycling companies purchase your old electrical items. Yes! They pay you, before sending them off to be recycled and reused.

A good way of doing your bit by recycling tech (and recouping some cash in the process), is selling your old smartphones, tablets and other tech online to a company like Plunc.

Watch our video below to see what all this is about:

What You Can Do

So what can you do to help this cause? Do your own Mobile Recycling!

You can start by searching drawers looking for any old mobiles (and any other electrical devices) you might have discarded. Once that's done, get in touch with a recycling company or use an online comparison site such as OnRecycle to find the best price available for your discarded mobile.

If you think that is too much hassle, then there is a much easier option!

Pass it on – via Mobile Recycling.

You can pass your old phones on to charities. They then raise vital funds by selling the phones to recycling companies themselves.

It is also a good idea to ask any friends or family members. Yes! Ask them if they have an interest in taking your old phone off your hands.

Alternatively, you can sell them on online marketplaces like eBay or Gumtree.

Or, why not take them down to your local car boot sale.

Mobiles contain such valuable resources that throwing them away are simply just a waste.

But, with the environmental and health hazards that come with dumping them in landfills, mobile recycling takes on increased significance.

So, next time you're due that long awaited upgrade, remember the 3R's (reuse, recycle, reduce) and help improve and protect our environment.

Click on the following link for your mobile phone price comparison: www.onrecycle.co.uk

How Hoarding Mobile Phone Users are Damaging the Environment

According to waste reduction advocates in B.C. the average person in Canada gets a new mobile phone every 18 months. More than six out of 10 Canadians have a cell phone they are not using and have stored it away.

The Recycling Council of B.C. wants to mark Earth Day, by persuading people to empty their junk drawers and cupboards for old phones. They should bring them in to be reused or properly broken apart.

The copper, silver and gold in these devices is easy to recycle

The devices have metals such as copper, silver and gold in them that can be used for new phones.

“When it's just sitting at home we have to mine for more natural resources to make new phones. Whereas, we could reuse the materials from your old phones once it's been recycled,”

said Harvinder Aujala with the council.

“We just want to encourage everyone to take those old phones out of your drawers that are sitting around. Above all, make sure that you're not putting them in the landfill, and help the environment by recycling your phone,”

said Robert Ghiz, president and CEO of the association.

Ignorance is a Likely Cause…

The Recycling Council of B.C says it gets around three calls every day to its hotline from people asking how to recycle phones.

“We think a lot more people probably have them and don't know where to take them. Or, maybe don't know they are recyclable. We're encouraging more people to either give us a call or go online and find out how to responsibly recycle their cell phones,”

The association runs a free recycling program across Canada. It allows anyone to drop off or mail in their old phones to be recycled. There are 250 locations in B.C., according to Aujala.

Ghiz says since 2005, the program has recovered more than 7.5 million devices. via ca.news.yahoo.com

Raising Awareness of the Need to Recycle Old Phones in China

A Chinese artist on Saturday unveiled a sculpture made of discarded mobile phones. It's shaped like a cell tower in a bid to highlight the problem of electronic waste.

The phones were rigged to a metal frame and synchronized so their screens would flash in various colors.

“The inspiration of my tower comes from the Tower of Babel in the Bible,”

Displayed in a busy shopping mall in Beijing, the sculpture attracted scores of curious bystanders who stopped to take photos of the exhibit.

“Didn't realize cellphones could be recycled and used again”

“I originally thought environmental protection is waste sorting. But I didn't realize cellphones could be recycled and used again,”

“After seeing this tower, I decided to donate my old cellphone here to make use of its remaining value.”

“China's waste from computers, mobile phones, and other electronics will reach 15.4 million tonnes by 2020”,

As a leading manufacturer and consumer of electronic goods, China was a logical place to launch an e-waste recycling and reduction campaign, the group said.

“If these metals are recycled, we can reduce mining and damaging the environment,”

Recycle Your Mobile Phone – Don't Cause a Fire by Throwing it in Your Waste Bin!

Lithium-ion batteries are suspected to be the cause of an ongoing fire recently at the Virdior Household Waste Recycling Centre (HWRC) at Westhampnett near Chichester.

Following consultation with the Environment Agency it was decided to allow the fire to burn in a controlled way and not use water, in order to prevent pollution to local water courses. This is being kept under close review.

Viridor – “… batteries are the main cause of waste site fires. They are commonly found in a variety of products, including mobile phones, toys, cameras, e-cigarettes and laptop computers”

The cause of the fire is not yet known. However, a Viridor spokesperson said the company suspects the cause is likely to be lithium-ion batteries.

Viridor said in a statement: “These batteries are commonly found in a variety of products, including mobile phones, toys, cameras, e-cigarettes and laptop computers.

“We ask the public to dispose of all batteries responsibly by taking them to a Household Waste Recycling Centre.“

Recycling your mobile phone can also save lives in the developing nations, as described in the article here.