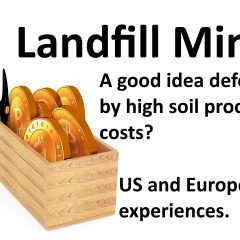 We first posted about landfill mining quoting from a CIWM Press Release in October 2008. As below, and now, almost 10 years later we have added our update. So what has happened to landfill mining since 2008? Almost nothing in Europe it seems, but since then, some landfill mining has been implemented, especially in the […]

The citizens of Raleigh County, West Virginia watch as strip mining destroys the forest they’ve always called home. It is a land dominated by heritage, history and a simple way of living that has not seen much change in the past century. The people who live around the mining activities are not eager to see […]