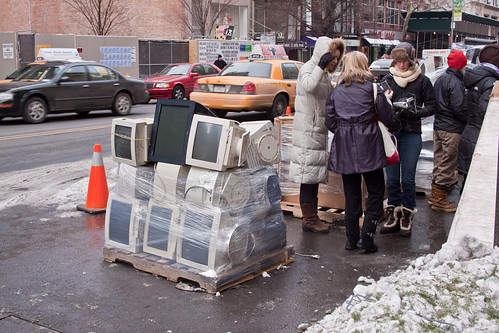 Just like in other nations the rise and rise of gadget use and disposal is causing real worries for our environment. In Malaysia the Department of Environment has announced that discarded mobile phones should all be recycled. This is to avoid environment-related emissions which they are concerned will bring health problems. The scale of the problem becomes clear when we are told that there are 37 million registered units in the country.
(Image: Tekserve Apple Specialist via Flickr)
There is no equivalent to the EU WEEE Directive, in Malaysia, which requires all electronic goods manufacturers to accept the return of their old phones and then recycle them or the materials they contain to produce the absolute minimum effect on the environment. In Malaysia, discarded phones, computers, and washing machines containing lead, mercury, and cadmium are still dumped in landfills.
It is a fact these substances will leach out from the devices and seep into the ground, but only if the landfills are not properly lined. Some of the government's worries seem to be overstated in this respect as the large Malaysian landfills are now fully lined to modern standards as far as we are aware.
It is no doubt correct that, as they state: “If exposed for long periods, these metals can cause learning disabilities in children and damage the lungs, kidneys and liver,” as she told the New Straits Times. Furthermore, the future for the country's children is not as bleak as it sounds, if the government sticks to its promise a household e-waste recycling project in Penang it was indicated will be used as the forerunner for an e-waste recycling system which will be introduced nationwide.

You can read the original article, in full, at the link given below:

“The local scenario was not as alarming as in developed countries, Che Asmah said, adding that the government was monitoring a household e-waste recycling project in Penang before carrying out the system nationwide. E-waste is regulated under the …”
http://www.nst.com.my/top-news/e-waste-danger-looms-1.111422

Information about e-waste management, including a list of recycling events for 2020, is available at the Complete Guide to Electronic Waste Recycling.

As always, your comments are welcome below, in our comment box: