Nature's No. 1 Green-Waste Disposal Solution is composting in normal life. Composting is frequently given such a glowing reputation by its devotees that sometimes one wonders whether it can be as beneficial to a company, such as a plant nursery, as they suggest. Well, I guess we had better get ready to be convinced by the huge success story for composting, which this article – excerpted below – describes.

One of the extra benefits Bylands saw was apparently not only savings on fertiliser costs, but the compost proved even more nourishing than chemical fertiliser. Fields can now be planted with crops each year, instead of in a two- or three-year cycle, as they were previously. And, well! I suggest you read on to find out just how successful composting has been for people that have adopted it, like this example:

“When Bylands Nurseries wanted to cut disposal fees for its green waste, it created a composting program that has brought big savings, better quality and new …Globe and Mail

Such a large operation produces hundreds of tons of green waste every year. But unlike other nurseries or farms with ravines and other such areas where such waste can be dumped, Bylands had no place to dispose of its waste.

Instead, recalls Mr. Byland, â€œwe were trucking our prunings, unsold plants, weeds and other material to the municipal landfill here in Kelowna. At the time, we just had to pay trucking costs so it was not that onerous a task.â€

However, from the mid-1990s onwards, the Kelowna municipality started to charge fairly significant tippage fees to discourage people from using landfill facilities. These increased every year to a current $40 per ton of waste.

“Since it was becoming increasingly expensive for us to dump our green waste, we had to think of an alternative”, Mr. Byland says. 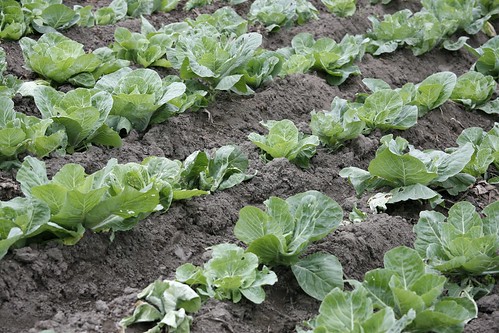 Bylands was started in 1954 by Mr. Byland' father, Adrian, an immigrant from the Netherlands, where horticulture had been in the family for hundreds of years.

After his father died 30 years ago, the younger Mr. Byland took over the business, gradually increasing its work force to 200 employees, creating a board of directors and shipping products to garden centres throughout Western Canada.

To overcome the mounting costs of disposing Bylands Nurseries' green waste at the municipal landfill, Mr. Byland decided to explore converting it into compost which he could then use to fertilise his fields.

He did a cost-benefit analysis, balancing the funds he would need to do the composting, including the mechanical necessities and labour, against the benefits, primarily the ridding of the landfill tipping fees.

In the end he thought the capital investment was one worth making, and started composting on a small scale around the year 2000, investing more significantly in the ensuing years.

After stockpiling Byland Nurseries' green waste, Mr. Byland and his team rented an industrial tub grinder at a cost of $450 an hour to break down all the organic matter into smaller particles. They then wind-rolled it before adding water and raising the temperature to 50 degrees Celsius for 15 days to pasteurise the compost.

Finally, the compost was run through a screening plant to emit all the large particles before being ready to nurture the company's fields as well as plants in the potting department.

Bylands Nurseries now produces about 18,300 metres of compost a year and has replaced peat moss formerly used in its potting mix with compost to save the cost of transporting moss from Alberta.

Mr. Byland and his team have also started a new revenue stream by bagging portions of the compost to sell to customers.

THE RESULT for Composting for Green-Waste Disposal

With operating costs of $120,000 a year to process the material, the compost program saves the company more than $400,000 a year in having to haul away material, pay for dumping or purchase similar product.

One of the extra benefits Bylands saw was not only savings on fertiliser costs, but the compost proved even more nourishing than chemical fertiliser. Fields can now be planted with crops each year, instead of in a two- or three-year cycle, as they were previously.

“Being able to plant more frequently has gained us the equivalent of 40 acres of plant production every year”, Mr. Byland says.

Mr. Byland also says that the compost has improved the quality of its soil, which is now yielding better trees and plants“, via Theglobeandmail.com

Please tell us your experience with composting for Green-Waste Disposal. It seems that we should all be doing it!! Amazing…