This is a problem which has been occurring for at least 10 years, and that more media space would be devoted to it, wouldn’t you?

Every major city in Britain with a university student housing quarter experiences this. And yet there is very little within the waste collection industry by the way of planning or systems in place to ensure that the problem of students being irresponsible with their waste, is dealt with effectively at each end of college year.

OK some of it isn’t irresponsibility, it is also to do with the surge of waste produced when thousands of people move house every June.

A surprisingly large proportion the rubbish they throw out, as they hastily clear their accommodation, and dash for home or sunnier climes, ends up strewn on the streets and causing an unsightly environmental health problem for the residents who happen to live next door to student rental accommodation.

In some cities the councils have on occasions launched a initiatives in past years to encourage students, landlords and residents to bag up their rubbish properly as well and even, heaven forbid, recycle as much of their junk as possible.

Inner city areas which tend to become colonised by students in term time, are not the wealthiest. They have troubles enough without having to put up with the mattresses, cookers, microwaves, bin bags torn apart by vermin and shedding rubbish or dumped building materials that student residents tend to discard so uncaringly. It can be quite an annual environmental disaster for a number of weeks in those areas affected.

It’s just that students often don’t care and that even extra skips put out by the council to cope with the problem are reportedly only used by the residents. The students seldom if ever use them.

And, with the student populations of many cities rising to some 30 000 that is the equivalent of the population of quite a sizeble town in its own right. 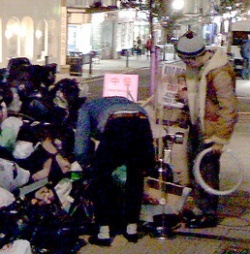 Strange as it is the current generation of students seem to have so little concern for the local neighbourhood. You’ll see them with Greenpeace stickers on their bags and windows and they often say they care about issues like global warming and “only buy biodegradable products”, but chuck un-bagged rubbish out of the front door without a care for the consequences.

Unfortunately this global concern doesn’t seem to be applied to problems at a more local level, like litter, graffiti and vandalism the things that bother residents the most!

One wonders whether the Universities and colleges should not be doing more themselves. In fact, such has been the concern about student rubbish, that one university has not only provided increased recycling facilities but campaigned for greater awareness. In many colleges student union buildings provide a lot of recycling bins, and similarly and at their halls of residence

The college authorities also find that they have to involve their staff in sorting out the waste collected and then donate items like books, bedding and clothing to local charity shops.

It is strange that so many students see humping rubbish to a responsible place of disposal as somehow beneath their dignity, when the rest of the community finds no such problems. Maybe that is just as well, otherwise waste collection and disposal costs would risk rising greatly or even doubling!

These issues of how to communicate to the student market and how to provide adequate facilities for those living in multi-occupancy housing are currently being looked at by ENCAMS. As part of 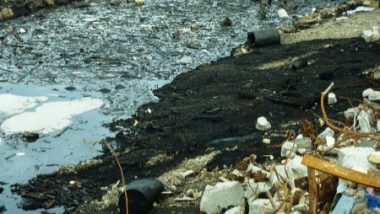