The near meltdown of reactors at the Fukushima nuclear power station in Japan has re-fuelled the renewables vs. nuclear debate, bringing the complex economics of low-carbon energy generation back to the fore.  We take a look at the impact of the disaster on the cost of nuclear energy generation, and question what this could mean for the renewables sector.

Nuclear power has long been considered an attractive, cost-competitive alternative to conventional methods of electricity generation.  At present, it provides roughly 18% of the UKâ€™s electricity requirements.  While it is difficult to ascertain the true cost of a modern nuclear plant â€“ Britainâ€™s newest (Sizewell B) is 16 years old â€“ it is clear that fuel costs make up only a minor proportion of their total generating costs.  The downside is that capital costs are significantly greater.

Thus, while the fuel is cheap, nuclear power plants themselves are highly expensive to build and the reward from that investment is gradual.  Added to that, long or delayed construction periods only serve to increase costs (a prime example being the Areva plant in Finland, which is more than three years behind schedule and Â£1.6 billion over budget).  Factored in to these initial calculations, must be decommissioning and waste disposal costs, which equate to about 9-15% of the capital cost of a nuclear power plant.

Despite these hidden costs, nuclear power is considered to be a much cheaper option than the various renewable forms of energy generation, such as wind, wave, tidal and solar power.  Indeed, nuclear energy has a base cost of just 4 pence per kWh, while onshore wind power (the least expensive form of renewable energy) costs 7 pence per kWh to generate.  http://windpower-generators.info/

In keeping with EU targets, the UK is under an obligation to increase the share of energy it generates from renewable sources to 15% by 2020.  Most of the increase in renewable energy in Britain is expected to come from electricity generation â€“ with an anticipated rise from 5-6% renewables to 30-40% renewables in 2020.  On this basis, the higher costs associated with renewable generation in comparison with conventional and nuclear generation would increase costs by Â£6.8bn a year (that is, by 38 per cent). The costs involved in generating marine and solar renewable electricity are higher still.

All that might be about to change, however, as the nuclear industry counts the cost of the impending meltdown at the Fukushima nuclear reactor in Japan.  The atomic disaster has dealt a massive blow to future UK nuclear energy plans, with experts warning that the scheduled construction of new plants could be delayed by up to six months.  The position is set to deteriorate if safety issues raised by the incident increase the cost of reactors, a factor which is likely to have a knock-on effect on investment decisions.  Mark Hibbs, an atomic policy analyst at the Carnegie Endowment for International Peace in Berlin predicts that:

A further setback to nuclear energy generation has come to light in the aftermath of the disaster, as it transpires that it will be Japanâ€™s taxpayers â€“ rather than the nuclear industry â€“ who will fund the cleanup operation.  This has wide-reaching implications for the future of the nuclear energy sector, with some experts predicting that governments will now seek to transfer greater financial responsibility to plant operators.

In this vein, David Robinson, a senior research fellow at the Oxford Institute for Energy Studies predicts that:

Any such â€œburden-sharingâ€ could build on the (unratified) 2004 amendment to the Paris Convention, which raised nuclear operatorsâ€™ liability in most European countries to 700 million euros.  This spells out very bad news for the nuclear power movement, as it greatly increases the economic burden on operators, to the detriment of energy prices as a whole.

Any increase in the cost of nuclear energy generation is however, good news for the renewables industry, which could now find itself on a more level playing field in terms of cost.  For many years, nuclear energy generation has been recognised as being more economically advantageous than renewable energy generation, but recent events look set to redress the balance.  The nuclear crisis in Japan, combined with the impact of the new â€œcarbon price support taxâ€ on fossil fuel generation announced in the 2011 Budget, will only serve to strengthen the case for renewable technologies as a safe, clean and cost-effective means of low-carbon energy generation.

Gas from Waste – Getting the Product Specification Right 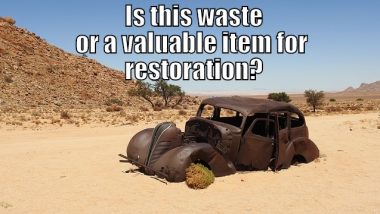 The Legal Definition of “Waste” and the Quest for Clarity