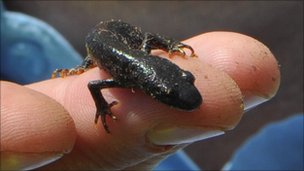 This juvenile great crested newt will grow spines on its back in adulthood Endangered newts are thriving at a landfill site in Suffolk which has a legal requirement to protect them.

The BBC's Springwatch has been looking at the wildlife that lives on rubbish dumps, which also includes snakes, badgers and birds.

Viridor, which runs the Great Blakenham landfill near Ipswich, has to move great crested newts to safe wildlife areas at its site.

The company's ecologist can oversee the movement of over 10,000 newts a year.

Viridor operates the site which has been a landfill since 1992 when it ceased to be an operational quarry and cement works.

Clive Barber, general manager, said: “Certainly if you're here first thing in the morning you can see foxes and deer quite regularly.”

The company is currently dumping 80-100 lorry loads of waste in the landfill each day.

Other areas are being prepared to be used as landfill, while the newts are moved to areas which have finished being landfill.

Giant plastic covers are spread over the rubbish to seal it in and at least a metre of earth is put on top and then landscaped.

Litter such as plastic bags can blow into the newt ponds, but it has to stay there in the summer.

Jamie Tompkins, unit manager, said: “You can't take it out at the moment in case there's any newt eggs on the litter itself.”

The landfill forms rich pickings for sea birds, which can number in the tens of thousands in the winter. 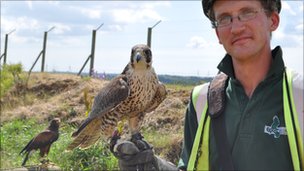 Viridor uses birds of prey to frighten the gulls away or kill the weaker ones.

Paul Morris, bird controller, said the gulls are a pest: “They don't attack the workmen, but if they're left alone they will climb all over the machinery and do what they do after they've eaten.

“And you would literally be driving [the heavy plant which works on top of the landfill] through a carpet of gulls and it's not safe.

“Landfills and quarries are ideal for wildlife, which just needs a habitat, food and very little human contact which is what you have here.”

“At the moment we've got about five million cubic metres of void space left, so we're probably going to be here for the next 10-15 years,” he said.

“People are just more green – we're not using as many carrier bags and things like that. There's still a way to go, but we are changing.

“We are now a predominantly recycling company, so we're gone from a throwaway society to a resource recycling society and we make out of the recycling side of it as well as the landfill side of it.”