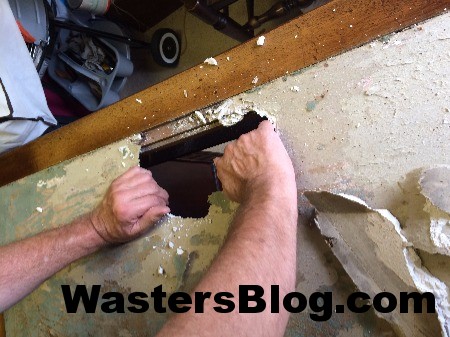 In a welcome development toward waste avoidance, SEPA has announced that scrapped plasterboard that meets BSI PAS109:2008 won't count as waste. This is very encouraging to the recycling companies invloved as it will cut down on their costs and also on paperwork when it comes to reprocessing it.

Between 1.1 and 1.75 million tonnes of plasterboard enters the waste stream each year in the UK, which is not only a waste of resources but also, potentially, an environmental problem.

Scotland's environment watchdog is hoping to encourage more businesses to increase the amount they are recycling, by confirming that waste plasterboard which has been processed to the correct specification, is no longer classified as waste.

If gypsum comes into contact with biodegradable waste in landfill, toxic and smelly hydrogen sulphide gas is produced. However, if producers separate it for recovery and recycling, it can then be used to replace virgin gypsum in the plasterboard, cement and soil conditioner markets.

To promote the market for quality gypsum recycling, the Scottish Environment Protection Agency (SEPA) has taken the position that where waste plasterboard is processed in accordance with BSI PAS109:2008, it will no longer be regarded as waste.

The recently published BSI PAS 109:2008 “Specification for the production of recycled gypsum from waste plasterboard” specifies minimum requirements for the recycling process itself. It covers the selection, receipt, handling of inputs, specification of product grades and the storage, labeling, dispatch and traceability of the products that are produced from that process.

BSI PAS 109:2008 compliant gypsum which has been recycled to the correct specification and is to be used for plasterboard manufacture, cement manufacture and as soil conditioner, will no longer be regarded as waste by SEPA. This means the subsequent storage, movement and use will not be subject to the requirements of waste legislation, meaning it does not need to be transported by a registered waste carrier or accompanied by a controlled waste transfer note.

“SEPA supports the responsible processing of waste materials into high quality products as part of achieving a Zero waste society. SEPA's policies on the disposal and recovery of gypsum from plasterboard will reduce pollution from landfilling and will also facilitate the recycling of this valuable resource.”

“We are delighted that SEPA has adopted the BSI PAS 109:2008. Scotland has a vibrant building industry and SEPA is sending strong signal to industry that it takes the issue of construction waste very seriously.”

To take advantage of this position the local SEPA team must be contacted and a demonstration of compliance with PAS109 must be provided. BSI PAS 109:2008 covers the selection, receipt, handling of inputs, specification of product grades and the storage, labelling, dispatch and traceability of the products that are produced from that process.

Processors and users are not obliged to comply with these terms, but reprocessed gypsum that is not BSI PAS 109:2008 compliant will remain classified as waste.

The full position is available under the category “regulatory guidance” – click here.